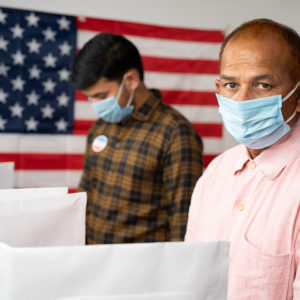 Chester County Ready to Count as Many as 200,000 Mail-in Ballots on Election Day

Chester County is preparing for a deluge of absentee and mail-in ballots this year and getting ready for a large central count operation on Election Day involving 150 staff people.

“We’re expecting about 200,000 ballots to come back, so that’s basically three shifts of 50 people, because this will be a 24/7 operation,” says Bill Turner the acting director of Chester County Voter Services.

The count of absentee and mail-in ballots will start at 7 a.m. on Election Day, the earliest state law allows, and carry on through the night until it’s finished.

“Our goal is to have all of our mail-in ballots counted by sunrise on November 4,” Turner told the Pennsylvania House Democratic Policy Committee at a hearing last week.

For the first time ever, the count of absentee and mail-in ballots in Chester County will not take place at the Voter Services offices, but down the road in the gymnasium at West Chester University.

State law allows each political party to designate three people to observe the count and each candidate to designate two. And citizens may be able to watch it from home. Like some other counties in the state, Chester County has talked about the possibility of livestreaming the count, but no decision has yet been made.

The people counting the ballots will be a combination of Voter Services employees, county employees from other agencies and also temps, says Turner.

“We did a big recruitment to get as many as we could filled from the county employees,” he said in a phone interview, “but there were some gaps, so we have a temp agency working to recruit some staff members that can handle some of the grunt work, if you will; so, you know, flattening the ballots and unfolding them. But the actual counting and scanning and the more sensitive tasks will only be handled by county employees.”

The process, he says, will be broken down into three basic tasks: Opening ballots; smoothing and sorting ballots by precinct; and scanning ballots.

They’ll be scanned by precinct, he says, and it’s likely that the county will follow what it’s done other years and post the numbers by precinct as they go, as opposed to waiting until the next morning and posting all mail-in and absentee numbers at the same time.

Chester County had a total of 371,686 registered voters as of October 9. Traditionally a Republican County, it went for Clinton in 2016 by a margin of more than 25,000 votes, or 9.4 percent, while Donald Trump won the state and its 20 electoral votes to win the presidency.

As of Oct. 9, there are 154,463 registered Democrats in Chester County and 152,029 registered Republicans, with another 65,000 who are registered with minor parties or have no party affiliation.

This is the first presidential election since Pennsylvania passed its no-excuse absentee voting law in October of 2019, and due to COVID-19, the Democratic Party has pushed Joe Biden supporters to use this option to vote by mail. Democrats have responded, with a heavy majority of the mail-in ballots being requested by Democrats.

Voter Services is already working to fix errors voters may have made.

Turner says that of 130,000 mail-in and absentee ballots that his office has sent out, close to 30,000 have already come back, and that of those about 30 were found by a machine to not have been signed. His office is contacting those voters to give them an opportunity to come to the office and “cure” their ballots by signing them.

Statewide, more than 2.5 million voters in Pennsylvania have requested either mail-in or absentee ballots, Deputy Secretary of State for Elections Jonathan Marks said last week, and almost 171,000 have already come back — about 7 percent of the total.

There are 13 election-related lawsuits pending in Pennsylvania, more than in any other year. Most are related to mail-in and absentee ballots, how they can be collected and under what circumstances they can or cannot be rejected.
On Saturday, a federal judge in Pennsylvania said he did not have the right to interfere in the decision by counties to provide drop boxes — even unsecured drop boxes — for collection of ballots or to say that there should be a strict requirement that signatures on ballots match the signature on file for that voter.

In Chester County, 10 drop boxes are opening at county library locations on Tuesday, Oct. 13 and each will be staffed with two people during the hours that they are open. Also, two satellite Voter Services offices were opened last week, one at Henrietta Hankin Library in Chester Springs and a second at Oxford Library in Oxford Borough.

The plan, says Turner, is for 195 polling places to be open throughout the county on Election Day.