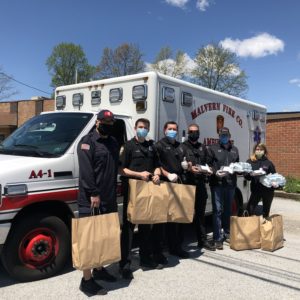 Although hard to imagine, there was a time in 2020 — even if only in January — when almost no one had heard of the novel coronavirus, and life seemed to be keeping pace with its usual rhythms.

When 2020 began, the J. Scott Catering company already had more than 200 weddings and other events booked on the calendar for the upcoming year — a phenomenal advance booking emblematic of 26 years of work and reputation building in the community.

“We were poised to have our best year, and then the music stopped for us on March 8th,” said J. Scott Walsh, founder and namesake of the business he rooted in Malvern in 1994.

When the music stopped, 26 full-time employees were whittled down to four. One hundred and forty part-timers were chiseled away to two.  Losing those employees was like losing family, and many of them will never return because Walsh says so many are fleeing the hospitality industry, now viewed as unstable.

Perhaps the year comes down to one word: survival. Surviving the virus if you’re infected, surviving the loneliness of lockdowns and missed holiday gatherings, and businesses doing everything they can to survive the crush of lost business while trying to keep the books in the black. 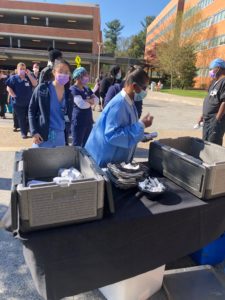 Walsh had to pivot with so much business evaporating overnight.

He started with a spark of creativity to take his product directly into the neighborhoods where homes were stuffed with people on lockdown looking for a bit of normalcy, craving a normal interaction as much as craving fresh food.

With at least some cash flow on the move, Walsh then found inspiration from one of his catering colleagues in Delaware County.

“Dominick Sevino from Drexelbrook Catering did an amazing job [working with] Visit Delco and he started ‘Food for the Front Lines,’ so we mimicked his model for Chester County,” in late March and into April, Walsh explained.

With the pandemic in full swing, schools being cancelled and hospitals experiencing their first waves of COVID-19 patients, Walsh and the small remainder of his team began taking the food trucks to hospitals, serving nurses, doctors and EMTs.

“We got notes afterwards from front-line workers that mailed letters to our office that really gave me a sense of purpose and really gave me a good feeling at a time where, obviously, everybody in the hospitality industry was feeling horrible.”

Behind the scenes, Walsh says his company was making protein-rich soups to give to his employees whose incomes were devastated. 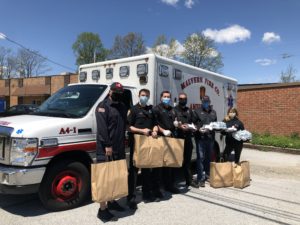 Community charity is rarely a solo effort, and that was no different for J. Scott Catering. The Phoenix Chamber of Commerce as well as the Chester County Chamber of Business and Industry helped duplicate the idea from Delaware County to theirs.

The numerous stops at hospitals when anxiety was peaking in the spring were partially paid for by donors. Sometimes foundations stepped in with large grants, while other times individuals could purchase a portion of a meal for a first responder as J. Scott picked up the rest of the tab.

Ann Davis with Total Table, the Paoli-based business, bought masks for J Scott’s cheesesteak food truck to distribute to hospital workers with every meal. Walsh also said Malvern resident Patty Holloway went “above and beyond” to give him private funding for the cheesesteak meals as well.

Although Walsh’s business doesn’t depend on in-person dining, he says he is in solidarity with the rest of the hospitality as they have been fighting the latest restrictions from Gov. Wolf, believing that the industry has been unfairly targeted.

“Restaurants and venues are safe places to be because we’ve always practiced the best in sanitation, and through this all we’ve had a full-time sanitation worker going around sanitizing high-touch areas. We’ve had all of our staff in masks and gloves. We give them all temperature checks.”

The trips to the hospital slowed during the summer when the virus spread was low, but having caught the charity bug, Walsh spent this Thanksgiving taking cheesesteaks to all police and firefighters on duty in South Chester. 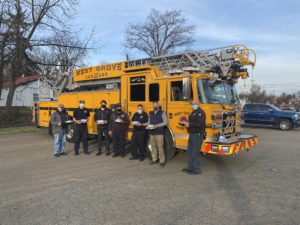 Government officials have been saying of late that the delivery of COVID-19 vaccines is beginning to offer a “light at the end of the tunnel,” and Walsh says he can see better days ahead — even if they’re not right now or tomorrow.

“We have a very strong 2021 and 2022 on the books because of our wedding venues, but if the government shuts us down again, it’s going to be extremely difficult to stay solvent if they start shutting down our spring and our summer.”