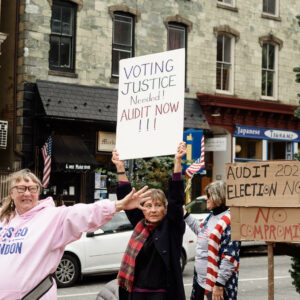 Chesco Ballot Problems in the Eye of the Beholder?

So, what happened on Election Day in Chester County? Ballot fiasco or “no big deal”?

Dr. Gordon Eck, chair of the Chester County Republicans, has requested a forensic audit of the November 2 election. He pointed to what he alleges were multiple ballot problems. His Democratic counterpart, Charlotte Valyo, dismissed those concerns and sees no need for further action.

The county Board of Elections is expected to discuss the issue on Tuesday, November 23, after Republican minority Commissioner Michelle Kichline sided with Eck and called for a recount. Residents who are concerned about election integrity have taken to the streets and held protests at the Chester County Courthouse to voice their concerns.

Republican Greg Simotas, who ran for a seat on the Downingtown School Board, was ahead in the vote count on election night. But by Wednesday morning his margin had dropped and eight days later the results showed he had lost at 45 percent to Democrat LeeAnn Wisdom, who ended up with 53 percent. Simotas is not claiming there was fraud. But he says the process of counting the ballots was not smooth and he was disturbed that misplaced ballots were found after the election, among other irregularities. He says an investigation is needed for people’s “peace of mind about the integrity of the election.”

“We need to get to the bottom of what happened,” Simotas said. The process was “inefficient and sloppy.”

A GOP press release outlined the details of alleged irregularities, which included mail-in ballots that were damaged by a machine that opens the mail and then taped together, jammed scanners, a bag of uncounted 265 ballots found days after the election, and problems with UBS computer sticks with votes stored on them.

Kichline sent a letter to her colleagues saying “these irregularities continue and must be fixed.”

“More importantly, the county must clearly identify and correct the failures of its election processes so that all our citizens may feel confident that their votes will be properly counted, recorded, and certified in future elections,” Kichline wrote. “Specifically, we must have answers about the chain of custody for every last vote cast in this election. The voters of Chester County deserve to know that their votes, whether sent by mail or cast in person, were properly handled and counted.”

“The issue is the process. How do I know my ballot wasn’t taped? What was the chain of custody? There needs to be an investigation. While this election had a 39 percent turnout, what will happen in 2022 when the Senate and governor’s race bring out 69 percent or more? How great is the magnitude of the problem? Election integrity is fundamental to our whole democracy,” Eck said.

But Chester County Democrats have another view.

“The continued insistence by the Republican chair that there were serious problems during this election is not just an effort to undermine confidence in election results, but also casts doubts on the performance of the Republican solicitor,” said Valyo. “Both the Republican and Democratic solicitors were included in all decisions made that affected the ballot counting processes. Both the Republican and Democratic solicitors agreed to the reconciliation process, the scanning process, and the determination that all ballots were secure at all times. Ballots have been counted and the results uploaded to the CCVS website and reported to the Department of State. As always there will be a bipartisan review of all election processes to improve procedures going forward.”

She also thanked everyone who voted and those who work at Voter Services.

“Chester County Voter Services has now uploaded election results that include all in-person, mail-in and absentee, provisional, and military/civilian overseas votes,” said Rebecca Brain, county spokesperson. “Throughout the ballot counting process, Voter Services staff has worked alongside both the Democratic and Republican parties, as well as experts from our voting system vendor, ES&S.  Having identified a discrepancy during the counting of mail-in and absentee ballots late last week, the county identified and isolated the cause of the issue, and recounted the impacted ballots in order to ensure every legally-cast vote was counted. These results remain unofficial until certified by the Board of Elections.”