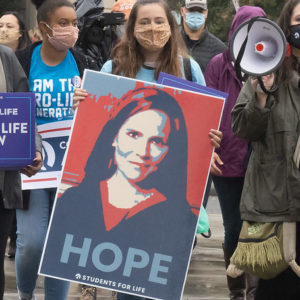 Catholic voters want to see both Joe Biden in the White House and Amy Coney Barrett on the Supreme Court, according to a new poll from Catholic TV network EWTN and RealClear Opinion Research.

Nearly half of those polled, 46 percent, support Coney Barrett’s nomination for the seat held by recently deceased Justice Ruth Bader Ginsburg, according to results released Monday night by the network. The poll showed Biden, a practicing Roman Catholic, has a substantial lead over Donald Trump among Catholic voters as well.

According to the poll, 46 percent of likely Catholic voters support the Barrett nomination compared to 28 percent who oppose it. That support increases to 54 percent among Catholics who regularly attend mass.

Catholic voters also support Biden over Trump by a 52 to 40 percent margin. EWTN’s survey, however, found that the gap “narrows to within the margin of error” between Trump and Biden in the swing states of Arizona, Florida, Michigan, North Carolina, Pennsylvania and Wisconsin.

Biden loses clout with Catholic voters due to his pro-choice stance on abortion rights, while Trump’s consistent pro-life position garners votes from many religious groups, including Roman Catholics.

Biden, who is a member of St. Joseph on the Brandywine in Greenville, Delaware, has seen his pro-choice stance create controversy with the church before.

Last year, he was refused Holy Communion — the most sacred ritual of the Catholic Mass — at St. Anthony Church in Florence, South Carolina, where he dropped in to attend service. Father Robert Morey, the priest who refused to give Biden communion, cited church teaching in a letter of explanation to the Florence Morning News.

“Holy Communion signifies we are one with God, each other and the church. Our actions should reflect that,” Morey wrote in the letter. “Any public figure who advocates for abortion places himself or herself outside of church teaching.”

Biden was asked about the incident by PBS Newshour in the fall of 2019 and refused to comment. “That was a private matter,” he said.

Biden created more challenges for anti-abortion voters when he flipped his position on the Hyde Amendment during the heat of the 2020 Democratic presidential primary. The Hyde Amendment bars the use of federal funds to pay for abortion except to save the life of the woman, or if the pregnancy arises from incest or rape.

More than half of Catholic voters (52 percent) say they’d be less likely to support a political candidate like Biden who is in favor of taxpayer-funded abortion.

The poll results, released Monday, are part of an ongoing “deep dive” into voter’s attitudes with the upcoming 2020 election on issues that relate to the church and politics, EWTN said in a press release.

“I really believe there needs to be more faith in this country because, frankly, you wouldn’t have the problems you have in Seattle, Portland and Chicago and Minneapolis and all these other cities if you had more family and you had more faith. We need a lot more of both of those,” Eric Trump said.

Vice President Mike Pence held a rally in Reading Saturday, and another in Harrisburg Monday, while President Trump has a rally slated in Erie Tuesday (his second visit in eleven days).

Former President Barack Obama is expected to speak in Philadelphia Wednesday and candidate Biden is slated to visit PA this week as well.

EWTN News and RealClear Opinion Research have partnered to conduct polls on Catholic voters’ attitudes and trends ahead of the 2020 election, starting in November 2019. This survey is the fourth one in the series, with results coming out just two weeks before Election Day, November 3.