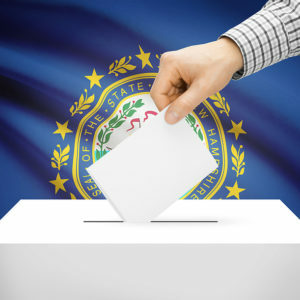 If the 2020 election proved anything, it’s that our system worked.

The Department of Homeland Security called the 2020 election “the most secure in American history” and still, the former president and his allies are smearing state election officials for no other reason than they are disappointed they lost. Even worse, some Republicans are using off-the-wall conspiracies as a reason to pass new laws to restrict voting options that performed beautifully in the 2020 election and led to record voter turnout numbers for both parties!

Here in America, every person who meets the proper legal requirements has the right to vote. And, when they do, their votes should be counted. This is basic. And, now is the time to solidify those promises with the Freedom to Vote Act.

The bill was largely influenced by Democratic Sen. Joe Manchin as a compromise to the Democrats’ first attempt at voting rights reform, which was widely rejected as a massive, federal overreach. And, it has a number of reforms that Republicans ought to like and make our elections systems even stronger and instill some much-needed confidence into the process.

This bill would accomplish a number of things to bring all states in line to provide a set of fundamental guarantees to voters. It establishes things like secure automatic online voter registration practices, early voting options, strong voter maintenance list standards to keep the voting rolls clean, and protections for military ballots. There are voter identification standards for in-person voting. In the past, Democrats have resisted these conversations, but now they see the value in how consistent practices create trust in our systems, something sorely lacking on the national level today.

The bill also would require a baseline of standards for mail-in voting. Many states expanded the ability to vote by mail during the pandemic, and those systems performed beautifully. There is simply no reason to restrict those options now, given their track record of success. Voting by mail is a necessary option for people people who have trouble physically appearing in person to vote–whether they are working, live in a far-off rural area, are in college, disabled, elderly, or otherwise unable to travel and stand in line to vote–by declaring that all registered voters may request mail-in ballots.

Although some states choose to conduct their elections entirely by mail, that system should never be forced upon the states by the federal government. This bill puts the power to decide how to vote in the hands of the voter, not the government.

The bill also asks states to use voting systems that use paper ballots that can be verified by voters, so in the event an audit is needed, there is no question about its accuracy. To help, grants will be available for the states to create ballot tracking systems and purchase modern quality voting equipment. Without verified paper ballots and tracking, there isn’t even a dependable way to even audit elections, should that be necessary.

Voters in one state should be able to trust that their fellow voters in another state have a similar set of standards for their elections. Given the high stakes of our national elections, it’s long past time to implement these basic guarantees for the voters participating in those elections.

Amanda Carpenter Amanda Carpenter is Director of Republicans for Voting Rights and former communications director to Senator Ted Cruz of Texas. She wrote this for InsideSources.com.