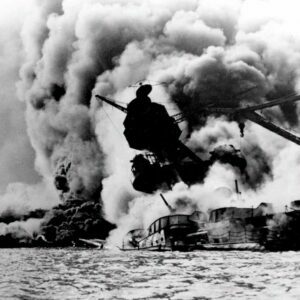 These were President Franklin Delano Roosevelt’s opening words when he addressed Congress and the nation the day after the surprise attack. These six words would become the rallying cry for the American people in the ensuing months and years as the United States fought its way across the Pacific and eventually defeated the Japanese.

December 7 marks the 76th anniversary of the attack on Pearl Harbor. It is fitting that on Pearl Harbor Remembrance Day we remember the U.S. sailors, Marines, soldiers, airmen and civilians who gave their lives that fateful day.

The attack commenced at 7:48 a.m. on a quiet Sunday morning while many sailors and Pearl Harbor residents were still in bed. At 8:06 a.m., a Japanese bomber dropped an armor-piercing shell atop the forward ammunition magazine of the USS Arizona. Within seconds, a catastrophic explosion tore the mighty warship in half and ignited a fire that would burn for two days. Of the 1,512 crewmembers onboard, only 334 survived.

Less than two hours later, the attack was over. The butcher’s bill was ghastly: 2,403 Americans lay dead or dying, with an additional 1,178 wounded.

The fleet was devastated: 17 ships sunk or damaged, including all eight battleships in port. One hundred eighty-eight aircraft were destroyed and 159 damaged, many as they sat on the ground.

Amid the tragedy were countless acts of valor and self-sacrifice — men and women who fought back amid the flames or risked their lives to save others. Pearl Harbor exemplifies the very best of the American fighting spirit and how our nation responds to tragedy.

There stood Navy Steward Doris Miller, the first African-American sailor to be awarded the Navy Cross. He manned a machine gun and shot down a Japanese bomber, even though he had never been trained to do so.

There rushed Grace Lally, the chief nurse of the hospital ship Solace. Seeing the attack unfold, she led her staff of nurses through a hail of bullets and bombs to reach Solace, the only ship with facilities to care for the wounded. She and her staff treated more than 300 wounded that day.

Julio DeCastro, a civilian shipyard worker, risked his own life to save the men trapped aboard the USS Oklahoma. Swimming out to the capsized ship, DeCastro heard the tapping of survivors. Within 24 hours, he and his team succeeded in cutting holes in the hull and saving the lives of 32 servicemen.

Rather than demoralizing the American people, the fires of the USS Arizona galvanized the nation with an unshakable resolve to defeat our enemies.

Recruiting centers were crowded with volunteers seeking to enlist and fight on ships, in airplanes or on the battlefields of the Pacific Islands or Europe. Millions more were just as crucial to the war effort, toiling in the factories and shipyards to build the ships, aircraft, tanks and guns our servicemen needed to fight and win.

On that December day in 1941, our forces were badly beaten. But that defeat determined the course of history in a way not imagined by our enemies. It stirred and mobilized the American people and set in motion a united national effort that produced future victories in battle and ultimately the war. It forged a new destiny and identity for America — that of a world leader resolved to challenge any aggressor who tried to attack our freedoms or those of our allies.

Pearl Harbor should remind us that America, our military — and especially our Navy — must be ever vigilant and always ready to fight and win against any potential adversaries.

Even today, oil continues to leak from the wreck of the Arizona. Survivors call these oil drops slowly rising the water’s surface “the black tears of the Arizona.” These “tears” serve as a reminder to every visitor to the Arizona Memorial of the sailors who perished 76 years ago and remain entombed in her hull.

Each passing year, leaves us with fewer and fewer Pearl Harbor survivors to tell their tales and those of their lost shipmates. It falls to every American to ensure the next generation, our children and grandchildren, know their stories and why this day in American history matters so very much.

This article was originally published by InsideSources in 2017.

Thomas Callender, a 20-year veteran and former director of capabilities for the Navy, is a senior research fellow at The Heritage Foundation. He wrote this for InsideSources.com.