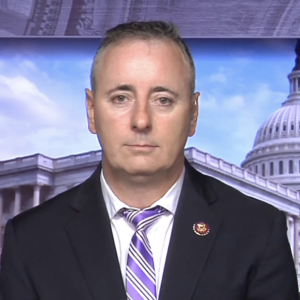 Noting the Biden Justice Department had taken “unprecedented action” in its raid on Mar-a-Lago, former FBI agent and current Bucks County Congressman Brian Fitzpatrick urged citizens and his congressional colleagues to “weigh the weight of their words.”

In an appearance on CBS’s “Face the Nation” Sunday, Fitzpatrick said he has been contacted by the FBI and warned that “my life has been put in danger recently” in the backlash to the DOJ’s seizure of documents from the home of former President Donald Trump.

“Because we don’t have that information I encourage all my colleagues on the left and the right to reserve judgment and not get ahead of themselves because we do not know what that document may contain. It’s going to answer a lot of questions,” he said.

The Bucks County Republican urged calm, telling host Margaret Brennan he is concerned about threats of violence to his former colleagues after the names of the FBI agents who searched former Trump’s Florida home were revealed.

“I myself have been notified by the bureau that my life was put in danger recently by some of these same people, and violence is never the answer to anything,” he said.

Asked about the rhetoric of some Republicans in the wake of the DOJ’s actions, Fitzpatrick said the problem is bipartisan.

Fitzpatrick mentioned the 2017 attack on the Republican Congress members at a baseball practice by a Bernie Sanders supporter, the recent threats to U.S. Supreme Court members after Roe v. Wade was overturned, as well as threats to law enforcement during the riots of 2020.

Fitzpatrick has been offering measured responses to the Mar-a-Lago raid since the news first broke. “As the only FBI agent in Congress, I’ve been getting many inquiries regarding tonight’s reported enforcement action at Mar-a-Lago,” Fitzpatrick said in a statement last Monday. “I will get to the bottom of this, will follow the facts wherever they lead and will report with unimpeachable integrity. I will get to the truth.”

His Democratic opponent, government and public service sector consultant Ashley Ehasz, says that is not enough.

“So now, all of a sudden, he wants to ‘get to the truth,’ after he voted against the Jan. 6th Committee and voted against impeaching Trump twice? As a combat veteran, I was deeply disturbed by Trump’s narrative that the election was ‘stolen,’ but this former FBI agent helped cast doubt on the election results by sending a letter to the Governor alleging election fraud when it was clear the results were sound,” Ehasz said.

Asked by CBS’s Brennan about the receipt showing Trump had classified and top secret and above in boxes in his home, Fitzpatrick said, “Nobody is claiming, certainly I’m not, that it’s okay to have classified information outside of a SCIF (Secure Compartmented Information Facility). I know that better than anybody, given my former profession and current committee assignment.

“But the problem is the administration is disputing a lot of what’s being publicly reported, so the affidavit will answer that question. It will be able to tell us who is providing this information. Is it the prior administration or the current administration? We need to get that clarified.”

Brennan asked whether it would be appropriate to release it now, during an active investigation.

“I would say at the very least, Margaret, for the public consumption, they can certainly bring it into the SCIF to bring it to our house intelligence committee members,” he said. “We, after all, do have oversight over the entire intelligence apparatus. So that’s what’s puzzling to us.”