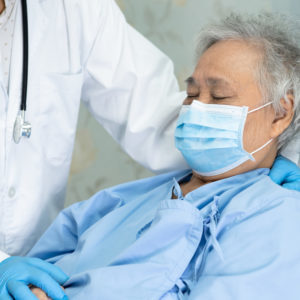 Should the state separate COVID-19 nursing home cases when calculating which counties can begin to reopen businesses and return to normal? Bucks County officials say yes, and they think they’ve got the numbers to prove it.

Gov. Tom Wolf has laid out a plan for reopening Pennsylvania’s economy based in part on infection rates in each county. Currently, the state moves a county from the “red” phase to “yellow” under the governor’s reopening plan when infection rates show “an average of less than 50 cases per 100,000 individuals over the course of 14 days.”

Under those guidelines, Bucks County is still locked in the red. However, both a group of Republican state lawmakers and a bipartisan group of Bucks County Commissioners are requesting Wolf adjust the metric to recognize that most of the county’s infections are coming from nursing homes.

They argue because nursing home infection rates are so high, it skews the larger picture of how robustly the protections against the virus are working in the wider community. If no allowance is made, moving from red to yellow would take much longer at a time when many businesses in the area are barely surviving.

In a letter to Wolf, Bucks County commissioners said if the metric isn’t changed, it could “permanently keep Bucks County in the ‘red zone.'”

In a news release accompanying their letter to Wolf in support of the commissioners, the eight Republican state legislators asked the state “to consider nursing home cases of COVID-19 separate when weighing whether to reopen Bucks County.”

“The increased number of cases is clearly in our nursing homes who are also doing increased testing,” Bucks County Health Director Dr. David Damsker said on 1210 WPHT’s The Dom Giordano Program Tuesday morning. “There are some nursing homes that are doing mass testing. So, we’re not artificially driving up rates — they are true cases — but they’re not impacting the community in any way.”

State data show that of the 240 COVID-19 related deaths in Bucks County, 178 of those came from nursing homes or long-term care facilities — almost 75 percent of the total.

Lyndsay Kensinger, spokeswoman for Wolf, told the Delaware Valley Journal that the administration is maintaining “consistent contact with state and local officials” during the crisis, but did not comment on the specific request from Bucks County.

“We are planning a measured and strategic approach to allowing Pennsylvanians to return to work safely to prevent a resurgence of the virus,” Lyndsay Kensinger said. “This must be done in the most effective, efficient, and risk-adverse method possible to balance our return to economic stability, while at the same time continuing to keep Pennsylvanians safe by controlling the spread of disease.”

At a Monday news conference, Pennsylvania Health Secretary Rachel Levine was asked if the administration’s plans to protect the state should be more focused on the elderly in long-term care.

“It would not be possible to close all of those facilities,” Levine said. “There are 695 nursing homes and several thousand personal care homes, all taking care of, predominantly, seniors. And we have been working very hard throughout this entire process on protecting those homes as much as possible.”

The state’s data show how concentrated much of the coronavirus outbreak in Bucks County is in long-term care facilities compared to a county like Philadelphia, which has 13,316 confirmed cases, but only 1,388 of them in nursing homes.

Last week, Bucks County announced it had counted 100 new COVID-19 deaths over a nine-day period, most of those coming from nursing homes, with one particularly hard hit.

“County Coroner Meredith J. Buck said 22 residents at the [Neshaminy Manor] county home who died had tested positive for COVID-19, in addition to seven presumed to have died from the virus,” the Philadelphia Inquirer reported. “Test results for four other deaths are pending.”