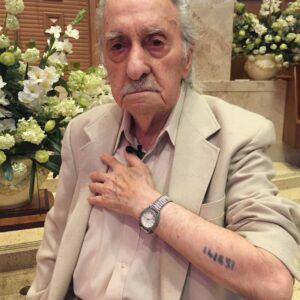 David Tuck was 10 years old when the Germans invaded Poland in 1939.

He spent the next five years as a prisoner, first in a Jewish ghetto in Lodz, then in several Nazi concentration camps, somehow surviving through his wits, prayer, and luck.

“Every night I prayed to God to see the light the next day,” said Tuck, who was five-foot-five inches tall and weighed 78 pounds at age 15 when he was liberated from the Mauthausen-Gusen concentration camp by soldiers of the U.S. 11th Armored Division.

The nonagenarian Levittown resident speaks to groups of students whenever he can with visits arranged through the Holocaust Awareness Museum and Education Center (HAMEC), which is housed at Keneseth Israel in Elkins Park.

Tuck’s mother died when he was six months old. His grandparents raised him until he was 8 when his father suddenly appeared and took him to live with his stepmother and younger step-siblings in a village near the Polish border with Germany.

After the invasion, the family was sent to the ghetto where Tuck, even though he was a child, worked in the food rations office because he could speak German. He saw people die from disease, cold, and starvation.

Two years later, Tuck was sent to the town of Posen and lived with other Jews in a stadium. There he lied about his age, claiming to be 15 so that he could work. He and other boys were sent into the town to collect trash. Scraps of food that they found helped them survive. But one day, three of those boys were missing and Tuck later watched in horror as the Nazis hanged them for violating rules. Tuck was also forced by the Gestapo to work at a cemetery removing gold teeth and jewelry from corpses.

When the Nazis closed the Posen labor camp, he was sent to build an autobahn, chopping stones and dirt as a slave laborer. One day he asked the foreman if he could help him by cleaning his boots. The foreman gave him bits of bread in return for his daily services.

In August 1943, Tuck’s captors moved him to Eintrachthutte, a sub-camp of Auschwitz-Birkenau. His head was shaved. A number, 141631, which remains to this day, was tattooed on his arm and he was given a striped uniform. He got himself listed as a mechanic and the guards assigned him to work in a factory where he built anti-aircraft guns.

“I did the best I could,” said Tuck. “I wanted to live…There was no food. It was just weak coffee and soup.”

He asked to help in the control room and the commander agreed and eventually began to give him bread. He hid bread in his shirt and kept it for the morning, but it would sometimes be stolen by other starving prisoners, he said.

One day, he hid a piece of the bread in a drawer in the factory and a guard noticed. He said he had exchanged it with another prisoner for cigarettes. Later, a guard took Tuck to the commander and Tuck asked the commander if he could go back to work to make guns for “our Fatherland.” The commander laughed and agreed but warned him never to come back or he would be “hung upside down,” Tuck said.

“From that moment on I knew I was predestined and I would survive,” Tuck said. “So many people, of course, did not.” At least 6 million people, mostly Jews, died in the Nazi extermination program.

When the Germans closed Auschwitz on Jan. 17, 1945, Tuck was shipped by train to the Mauthausen concentration camp in Austria, which took five days. There was no food, no water, and no bathroom. Tuck had saved a metal cup and tore a piece of cloth from his shirt. He attached it to the cup and used it to scoop snow from the ground through a small window in the train car.

Tuck believes it’s his duty to talk about his experiences so others know about the Holocaust and he has been speaking to students for decades now.

“Our goal is to reach out to as many young people as possible to educate them about the terrible consequences of hatred,” said Chuck Feldman, HAMEC president. “Our belief is because hate never takes a vacation, neither can we. And we believe the best way of informing young people is having a survivor tell their story.” 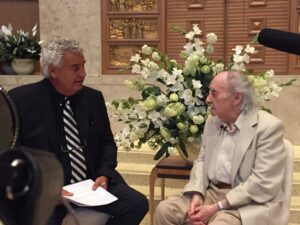 In the last 10 years, the 20 survivors working with HAMEC have spoken to more than 300,000 students.  There is no charge for the program, which is also available over Zoom and Skype and has reached people as far away as South Africa and Australia, he said.  The museum itself has many artifacts from the Holocaust on display.

Along with telling his story to the Delaware Valley Journal, Main Line TV filmmakers Jill Frechie and John Ricciutti interviewed Tuck in the sanctuary at Keneseth Israel. Their video is available on  Main Line TV Vimeo and in October  it will be shone on other venues, including PhillyCam, Radnor Studio 21, and Temple University TV.

“I only talk about the Holocaust, to never forget and never forgive,” Tuck said. “You never know. It can happen again.”

Although he knows five languages, he said English is hard, especially the spelling. “Who ever invented it?” he joked.

After the war, Tuck went to a displaced persons camp in Italy, recuperating from malnutrition. When he recovered, he decided to go to Paris where an aide agency helped him get a job and an apartment.

While in Paris, he met his late wife Marie Roza, who had also survived a concentration camp.  The couple came to the U.S. in 1950 and first settled in Brooklyn then Philadelphia. Tuck learned English with the help of a dictionary and found work in a clothing factory, then started his own company making slipcovers. He later became a real estate agent.  The Tucks had one daughter, Lydia, three grandchildren and seven great-grandchildren.

“I’ve taken an oath to remember it all for the next generation,” Tuck said. “What would I have if I hate? Do the best you can. Enjoy life. Make sure it never happens again. Why should I hate? I’m happy I survived.”