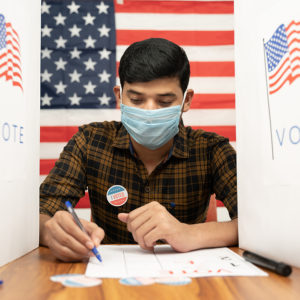 Bucks County Commissioner Bob Harvie (D) said on Thursday the county expects to have their vote tally wrapped up sometime on Friday, Nov. 6, assuming everything goes according to plan.

Vice-chairman Harvie also said the county expects to begin releasing its first batch of results at about 10 p.m. on Election Day, but that the rate of updates will be slower than voters have seen in previous years because of the high volume of mail-in ballots and how those are scanned.

The county’s update on voting logistics comes as negotiations between Gov. Wolf and the legislature on changing precanvassing — allowing counties to start processing ballots received by mail before Election Day — have reached an impasse. With no deal imminent from Harrisburg, counties will not be able legally to begin opening or tabulating their mail ballots until 7 a.m. on Election Day.

Numerous counties across the commonwealth, including Bucks, had been begging for an earlier precanvassing period, especially as much of the nation’s eyes on Election Day will be on Pennsylvania in determining the presidential race.

“Here in Bucks, being a swing county in a swing state, we already know there’s a lot of focus on us,” Harvie said. “And so we’re already prepared for people complaining that we’re not releasing results as quickly as they want, and that’s something that we’re going to have to take the brunt of the attention, the scrutiny, the criticism. But really the scrutiny should be on the people in Harrisburg who couldn’t come to an agreement to make it easier for us to do that.”

“Just as an example, the very first mailings we did started on Oct. 7, and by Oct. 9, we already had ballots back at the Board of Elections that people had dropped off — which means that they went into the mail on the seventh, people got them on the eighth or even the ninth, filled them out immediately and brought them to Doylestown or Levittown or Quakertown.”

Many polling places had to be consolidated for the June primary which occasionally led to lines. Still, officials are hopeful that, with more polling places in use for the general, that problem can be avoided. They also believe the high number of mail ballots will help keep lines shorter, too.

“The math is there’s 470,000 eligible voters here in Bucks County for the general election, and we’ve seen almost 200,00 people apply for mail-in. So if you look at those numbers just on their face value, one can make an assessment that we’re not going to see considerably long lines at our polling locations,” said Bucks County Chief Clerk Gail Humphrey.

The county said it is working as fast as possible to get the remaining 60,000 mail ballots out quickly.

Humphrey also addressed the troubling fact that an unknown number of voters received two ballots. She said the individualized bar codes on each ballot make it impossible for a single person to vote both ballots sent to them. When the first ballot is tabulated, the barcode from the second ballot will be flagged.

“I’ve [tested] it myself, it is a hard stop,” from the computing system, Humphrey said. Officials blamed a glitch with the voter database kept by the Department of State for the error.

A voting update like this would have been hard to imagine just a week or two ago as many legal issues were still being fought out in court. But now that the U.S. Supreme Court has taken a pass on tinkering with a September ruling allowing mailed ballots to be counted that arrive up to three days after Election Day, counties are operating with more certainty.

The deadline to request a mail ballot is Oct. 27. Harvie said residents can go to one of the three offices in Doylestown, Levittown, and Quakertown to request a mail ballot but said the county has created a reservation system to do that. Someone who walks in without a reservation may have to wait, and Harvie said the county has had to turn some people away because staff had no extra time.

Once a mail ballot has been sent or dropped off, a voter may track it at this website:  https://www.pavoterservices.pa.gov/pages/ballottracking.aspx

Commissioner Harvie has also created a 5-minute Facebook video that walks a voter through how to mark and return a mail ballot, paying special attention to the use of the secrecy sleeve or envelope. Votes cast without that sleeve are called ‘naked ballots’ and do not have to be counted.

Next door in Montgomery County, data released Wednesday shows the county has approved about 250,000 mail ballots, and 115,000 have been returned.

Update: A previous version of this article said precanvassing would allow counties to start counting ballots. Precanvassing only allows counties to begin processing those ballots. The article has been updated to reflect this.