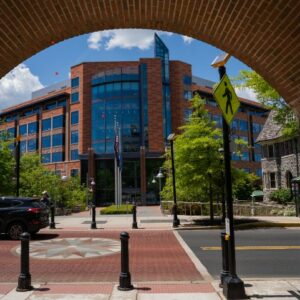 The two candidates running for Bucks County District Attorney may be opponents, but they aren’t strangers.

Current Bucks County District Attorney Matthew Weintraub, a Republican, will face off against his former employee, Democrat Antonetta Stancu, this fall. Stancu served as Chief of Major Crimes in the D.A.’s office.

Weintraub was appointed D.A. in September 2016 and clinched a four-year term the following year. During his time in office, he has enacted several programs including the District Court Drug Treatment Program and universal Narcan for all law enforcement. He is also proud of the fact that he has reduced the number of overall prosecutions year after year by diverting more offenders into treatment and other programs at the earliest stages in the criminal justice system while reducing financial barriers to entry for these same programs.

However, an elected public servant can never rest on his past accomplishments, Weintraub told the Delaware Valley Journal.

“When I became district attorney, I had to assess what was working and what wasn’t from a criminal justice perspective. I had to establish the baselines for effective public safety and then decide what major innovations to make. Consistency over time is important for effective public service because implementing new, innovative programs on a county-wide scale takes time and resources,” Weintraub said.  “And measuring the positive effects of these new programs on the public safety also takes time.” 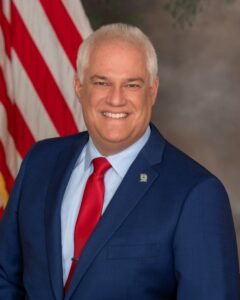 Stancu is an experienced prosecutor as well. She served as Assistant U.S. Attorney during the Obama administration, Deputy D.A in the Bucks County District Attorney’s office, and was special prosecutor to the D.A. offices in Philadelphia and Montgomery counties. Following her work in the Bucks County office, she launched her own criminal defense firm, Schatz & Stancu.

Asked why she wants to be district attorney Stancu said, “I love the criminal justice system, but I do believe that there are changes that can be made to make it stronger. And I believe that I can be a voice, pretty much for every member of the community, from citizens to law enforcement, based on my experiences.”

Stancu said she was motivated to run for D.A. more by the growing political climate than opposition to the incumbent.

“I think there are so many changes in society, across not only Pennsylvania but our country in general,” she said. “And I think what our community needs is somebody who can really be a voice for everyone. So I’m really running in reaction to what I believe is a necessity to our community.”

And she has the support of Democratic Bucks County Commissioners Diane Marseglia and Bob Harvie, who endorsed their fellow Democrat late last month.

Both Weintraub and Stancu agree there’s an urgent need for improvements in mental health programs. 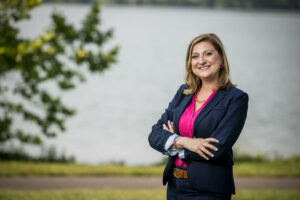 “We really need to get a handle on mental health and start making sure that we address issues early on, rather than waiting until it’s too late,” Stancu stated. “I have talked about is the fact that mental health is not taken seriously. Having worked in the [Bucks County DA’s] office, I can say there are a lot of changes and I believe mental health needs to be incorporated into each and every case, from the bottom up.”

Weintraub described a similar goal, stating he wants to improve the criminal justice system so it treats people more like individuals.

Asked about the contentious issues that separate Weintraub and Stancu, the incumbent said he believes there aren’t any.

“The county is safe and has become safer for the last five years. I don’t think there’s much difference between my opponent and me. There’s no good reason for me to be fired and replaced by the voters,” Weintraub said.

However, Stancu holds a different perspective, specifically referencing the DoorDash incident. Deputy D.A Gregg Shore was caught working as a DoorDash driver while on the county clock from October 2020 to February 2021. Stancu demanded that Shore be fired, but Weintraub said no. “I believe in second chances,” he said at the time.

“I believe every member of our community should be treated equally regardless of what political party you are or who you are friends with,” Stancu said. She added, “If you’re going to go out and say people deserve a second chance, that should be consistent through your prosecution style.”

When asked to comment on that statement, Weintraub said, “I agree with her 100 percent!”

While the two candidates may differ in political ideology and certain approaches to the office they are seeking, they are strikingly similar in their emphasis on people and community.

“I most enjoy going out into the community I serve and educating kids and community members on crime prevention and public safety.  If we can prevent someone from becoming a victim, or prevent a crime from happening, that is a win for all of us. I think it’s also important for people to see that their district attorney is accessible; a real, authentic, and regular person,” Weintraub said when asked about what he enjoys most about the position.

“I love our community. I have devoted 18 years of my life to serving, justice, and making sure that the system is better. And I believe that I can be the fresh face and fresh voice, to improve and represent every member of our community,” Stancu said.

It is the people that will decide who will become the next district attorney after all.

“Weintraub has my vote. We can’t take a chance on having another (Philadelphia D.A. Larry) Krasner in southeastern Pennsylvania,” John L. Lala said when opinions on the upcoming election were requested in a Bucks County community group. Another resident, Michele Roth, commented, “Weintraub has done a great job. He has my support.”

However, not everyone feels that way.