Bucks Commissioner Gene DiGirolamo: There Was No Fraud

Like most Americans, and much of the world, I watched in horror Wednesday as violence unfolded in our nation’s capital.

The words that came to my mind were “disgusting,” “disgraceful” and “painful to watch.” Especially as a lifelong Republican.

As a Bucks County Commissioner and as a Republican who served nearly a quarter century in the Pennsylvania House of Representatives, I can assure everyone that our election in Bucks County and across the Commonwealth was safe and secure. There was no fraud. No dead people voting. There were not more votes registered than citizens.

Yet much misinformation of this nature has been circulating, especially on social media. This is the direct result of the lies and rhetoric that our President, Donald Trump, has spread before, during and ever since the November elections. They have been debunked repeatedly in courts of law, often by Trump-appointed judges – in scores of baseless, failed legal challenges across Pennsylvania and the nation.

Yet even in the absence of evidence, the President’s lies continued unabated, and were the direct cause of the violence that happened on Wednesday. He incited the people who gathered in protest that day to commit these despicable acts of violence when they invaded the Capitol.

A building that symbolizes our republic was damaged and desecrated. The people’s business was interrupted by mob violence. Five people have died as a result. A woman was fatally shot. A police officer, attacked by the mob, was killed.

Enough is enough. You can’t believe a word that comes out of Donald Trump’s mouth. The dishonesty of our President is astounding. Our own Republican Senator, Pat Toomey, this week called him a demagogue, and I agree. Trump and his lies are not part of the Republican Party that I belong to, and it is time to pull our party free from the angry, cynical circus he has created.

As soon as Trump leaves office, like-minded Republicans must begin immediately to rebuild the national and state party in the images of former President Ronald Reagan and former Governor Tom Ridge. Both were strong, stand-up conservative leaders who held to their principles while showing decency and respect toward those with whom they disagreed politically.

Our local political leaders have already shown how this can be done. Shortly after the election, Bucks County Republican Party Chair Pat Poprik and Democratic Party Chair John Cordisco jointly sent a letter praising our Board of Elections for running a “fair, transparent and accountable” process.

“While we may each support different candidates, we both want the process to be fair,” the letter stated. This is what statesmanship looks like. It is what we have been as Americans, and can be again.

Those who protested peacefully in Washington had every right to express their First Amendment guarantee of free speech as long as it was peaceful. It is the violence that my fellow County Commissioners and I condemn, as we did last summer when Black Lives Matter protests turned violent in some of our cities.

In closing, I am passionate about what is at stake here. I have vivid memories from childhood of watching my grandparents – immigrants and naturalized citizens – coming in from the fields of our family farm on Election Day, changing into their Sunday-best clothes, and going out to vote. This is how much they loved their new, adopted country, and how much it meant for them to partake in our democratic process.

It is time to respect that process again. Time to stop the name-calling and the lying, and time for Democrats and Republicans to work together with our new President, and to be willing to compromise on issues, ideas and legislation.

And for my fellow Republicans, it is time to move past president Trump and begin to rebuild the Republican Party not only here in Pennsylvania, but also across our great nation. 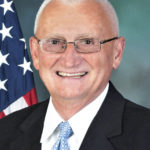 Gene DiGirolamo, a Republican, is one of three commissioners for Bucks County.