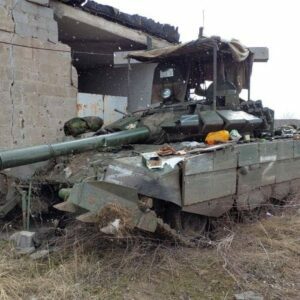 February 24, the day Russian President Vladimir Putin launched his unprovoked invasion of Ukraine, is going down as a turning point in modern history.

As we hit the war’s 100-day mark on Friday, one of the most significant lessons is Russia’s much-feared “modernized” army, the largest in Europe, is, well, not so impressive.

On Feb. 25, many Western pundits predicted that the Russian army, the successor to the Soviet Union’s Big Red Machine, would roll into Kyiv in days. Putin thought the same. Many elite units he sent south to Kyiv carried dress uniforms in their backpacks. They were preparing for a victory parade down Kreshchatyk, the main avenue of Ukraine’s capital.

Instead, the world watched as Ukrainians rallied to stop the Russians dead in their tracks. Partisan units used drones to blow up tanks. U.S.-supplied Stinger missiles shot down so many helicopters and bombers that Russia never controlled the air. Diesel supplies ran out. Soldiers deserted their units.

According to a daily tally maintained by Robert Homans, an American Ukraine expert in Washington, Russia lost 30,700 soldiers in the first three months of the war — more than double the 14,453 Soviet soldiers killed during the Soviet Union’s 10-year occupation of Afghanistan.

Going into the war, Westerners were guided by past gee-whiz articles, such as this April 2, 2014, piece in The New York Times: “In Crimea, Russia Showcases a Rebooted Army.” Written by two veteran reporters, the article came out two weeks after Russia’s virtually bloodless annexation of Ukraine’s Crimea peninsula, on the Black Sea. That surprise operation blindsided Ukraine’s unprepared and demoralized military. In that overwhelmingly Russia-speaking area, 9,268 soldiers and sailors — half of Ukraine’s military — defected. Only two Ukrainian soldiers died defending Crimea.

“Their uniforms were crisp and neat, and their new helmets were bedecked with tinted safety goggles,” reported the Times. “They were sober.”

Aleksandr Golts, an independent military analyst in Moscow, praised Putin’s massive military spending in the early 2000s, saying: “As a result of these reforms, Russia now has absolute superiority over any country in the post-Soviet space.”

The last word went to Mikhail Khodaryonok, a reserve Russian army colonel who was then editor in chief of Moscow’s Military-Industrial Courier. He told the Times: “Everything is in order. There is no more such shame as broken tanks and A.P.C.’s on the road, and outdated weaponry. … The epoch of decay has been fully overcome, and the armed forces of the country are on the rise.”

Fast forward to two weeks ago.

“The situation (for Russia) will clearly get worse,” he warned on May 16. Citing the massive Western aid in the pipeline for Ukraine this summer, he said: “The Ukrainian army can arm a million people.”

Referring to Ukrainian soldiers, he noted: “The desire to defend their motherland very much exists. Ultimate victory on the battlefield is determined by the high morale of troops who are spilling blood for the ideas they are ready to fight for.”

Beyond the battlefield, the veteran Russian analyst said: “The biggest problem with (Russia’s) military and political situation is that we are in total political isolation and the whole world is against us. … The situation cannot be considered normal when against us, there is a coalition of 42 countries and when our resources, military-political and military-technical, are limited.”

Two days later, Khodaryonok reappeared on the same show. He reassured viewers of state-controlled TV that the outlook for Russian soldiers in Ukraine this summer is not so bad.

James Brooke is a visiting fellow at the Foundation for Defense of Democracies with a focus on Ukraine. He wrote this for InsideSources.com.