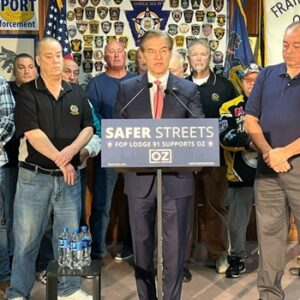 In his stump speech, Democratic Senate candidate John Fetterman likes to brag about his work with the Braddock police during his time as mayor.

“I’m running on my record on crime,” Fetterman told a Bucks County audience earlier this month. “I ran for mayor of Braddock, a community that has significant gun violence, to be mayor and fight that, and because of our working with the police and funding the police and working with the community, we went more than five years without a murder. It never happened before and never since I’ve been mayor.”

But on Tuesday, those officers gave their endorsement to his Republican opponent, Dr. Mehmet Oz.

“Many times, I was called to assist in Braddock when Mr. Fetterman was mayor. I know he says that he’s a law-and-order candidate. I have to disagree with that,” said Vincent Dicenzio, Jr., president of the Allegheny County Fraternal Order of Police Lodge 91, which includes the Braddock police officers.

Fetterman “was always good to show up for a photo opportunity. But as crime was going on in Braddock, you did not see Mr. Fetterman. Instead, you saw other police departments there assisting Braddock Police Department. I had the opportunity to sit down with Mr. Fetterman when he ran for lieutenant governor, and as the mayor of Braddock, he had no idea what their officers made. They didn’t even have a contract or benefits. They were one of the lowest paid police departments in Allegheny County.”

Fetterman’s campaign did not respond to a request for comment about the Braddock police officers’ endorsement of his opponent.

Oz, who is also endorsed by the Philadelphia Fraternal Order of the Police, the EP Jermyn FOP Lodge 2 in Scranton, and the Pennsylvania Sheriffs’ Action PAC, used the opportunity to return to his campaign’s law-and-order theme.

“We have seen a tragic increase in crime in Pennsylvania. As senator, I will work across the aisle to ensure we are keeping our communities safe from criminals and cartel organizations and preventing the flow of illegal drugs like fentanyl across our borders. The Pennsylvania FOP has unanimously endorsed me because they know that I will put the safety and security of officers and law-abiding citizens first. Together, we will return safety and security to our commonwealth,” Oz said.

Oz added Fetterman “supports releasing murderers, decriminalizing heroin, and open borders, while I will secure our border, fund our police, and support critical local services that provide help to addicts.”

A day earlier, Oz was also endorsed by a coalition of local unions in the Council of Prison Locals, a national group representing more than 30,000 federal corrections officers across the country. That endorsement followed the Pennsylvania State Corrections Officers Association’s endorsement earlier this week.