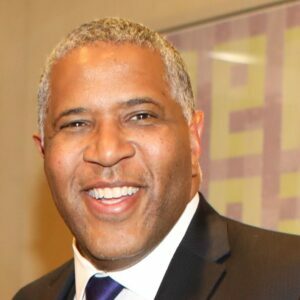 It is better to light a single candle than to curse the darkness, the saying goes. And a group of Black and Jewish leaders is taking that spirit to the fight against racism and antisemitism — times 15.

In a full-page ad in The New York Times last Saturday, a group of Black and Jewish leaders called for Americans to join them in a coast-to-coast display of unity “to dispel the darkness of racism and antisemitism in America” for the 15 nights of Hanukkah and Kwanzaa.

The call comes in the aftermath of celebrity Kanye West’s recent high-profile antisemitic statements, and his appearance alongside white nationalist Nick Fuentes at a dinner with former President Donald Trump. “At a time when racism and antisemitism are on the rise, I am determined to partner with leaders from all faiths to recognize ‘Fifteen Days of Light,’” wrote billionaire venture capitalist Robert F. Smith. “We are unifying to celebrate Chanukah and Kwanzaa together, and encourage communities nationwide to join us in our support for one another.”

In 2020, Smith was named the “richest Black man in America.”

The ad, which features several Black and Jewish leaders, calls for Americans of all faiths and backgrounds to participate in “15 Days of Light” — the eight nights of Hanukkah and lighting the Menorah, followed by seven nights of Kwanzaa and lighting the Kinara. It uses the hashtag #LightTheCandles and offers more information at LightTheCandles.org.

“My father believed very strongly that one should never compare suffering. African Americans and Jews have suffered immeasurably and are increasingly targeted today,” said Elisha Wiesel, the son of Holocaust survivor and Nobel Peace Laureate Elie Wiesel and a supporter of the effort.

“The lies that Jews are colonizers or oppressors are as vile as the lies that fueled Jim Crow. It is time to expose hate speech for what it is and leave no question that it is intolerable. My father lit Chanukah candles even in Auschwitz, surely we too can find hope in the light.”

The Anti-Defamation League has been tracking incidents of harassment and violence targeting Jews in the U.S. since 1979. It says 2021 saw the highest number of incidents ever with 2022 on a similar track. And while many antisemitic attacks are committed by White people — the Tree of Life Synagogue shooting in Pittsburgh, for example — the recent incidents involving Kanye West and NBA star Kyrie Irving are reminders the problem exists in the Black community as well, the advocates noted.

“A machete attack in a Monsey, N.Y. synagogue and a shooting in a kosher supermarket in Jersey City, both aimed at Jews left seven people dead in 2019,” the ad states. “And videos of Orthodox Jews in Brooklyn being attacked and harassed have tragically become commonplace.”

It shouldn’t be this way, said Dr. W. Franklyn Richardson, chairman of the Conference of National Black Churches and who appears in the ad.

“African American and Jewish communities share a common struggle to live in human dignity, devoid of hatred and oppression. We both believe in a powerful God and have a legacy of strong faith… and are mandated to link resources to hold back the darkness of racism and antisemitism.”

As for the antisemitic conspiracy theories pushed by Kanye and others, advocates for cooperation between the Black and Jewish communities note they have a long legacy of standing side-by-side in the face of hate. For example, Peter Dreier, chair of the Urban and Environmental Policy Department at Occidental College writes that “although Jews made up less than three percent of the nation’s population, they made up at least half of the young people who participated in the Mississippi Freedom Summer in 1964.”

And one of the most iconic moments of the fight against Jim Crow was Rabbi Abraham Joshua Heschel marching arm in arm with Reverend Martin Luther King, Jr. during the 1965 march for voting rights.

Marie Fischer of the Project 21 Black leadership network described herself as “a Jewish woman who happens to be Black.” Fisher sees value in the project but asks, “What’s next? What happens after the 15 nights?”

She said she believes the long-term solution is to reconnect young people in both communities to their faith traditions and their history.

“I personally feel that so many in both groups have abandoned a strong faith in G-d, a strong dedication to family, and a lack of knowledge of their people’s history,” Fisher said. “If we really want to see the two groups working together, we need programs that will educate our younger generation about their own history, values, and beliefs.