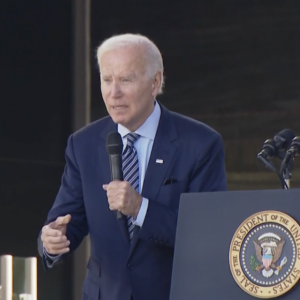 Biden’s Pledge to ‘Shut Down’ Coal a PA Faux Pas?

President Joe Biden’s West Coast comments about shutting down all coal electricity production are not playing well in the deep-purple state of Pennsylvania, where the coal industry is still a significant player in the state’s economy.

During an appearance in San Diego touting his $80 billion CHIPS Act subsidizing the production of semiconductors in the U.S., Biden noted electricity production is moving away from coal and toward renewables.

“So, it’s going to become a wind generation. And all they’re doing is it’s going to save them a hell of a lot of money and using the same transmission line that they transmitted the coal-fired electric on,” he said. “We’re going to be shutting these plants down all across America.”

Sen. Joe Manchin in neighboring West Virginia lashed out at what he claims is a betrayal by his fellow Democrat.

“Let me be clear, this is something the president has never said to me,” Manchin said in a statement. “Comments like these are the reason the American people are losing trust in President Biden and instead believe he does not understand the need to have an all-in energy policy that would keep our nation totally energy independent and secure.

“It seems his positions change depending on the audience and the politics of the day. Being cavalier about the loss of coal jobs for men and women in West Virginia and across the country who literally put their lives on the line to help build and power this country is offensive and disgusting,” Manchin added.

Pennsylvania produced 42,460 tons of coal in 2021. Demand for coal worldwide has spiked as natural gas prices have risen and supply has restricted. U.S. production rose by 7.8 percent in 2021 and about 40,000 Americans work at U.S. coal mines, according to the U.S. Energy Information Administration.

“President Biden’s comment on our nation’s coal capacity – which provides stability for millions of American households and businesses in a time of energy-driven inflation – is completely incompatible with the state of the U.S. electricity grid, which is teetering on the edge in many parts of the country,” said Rich Nolan, president of the National Mining Association. “U.S. consumers face an upcoming winter with some of the highest anticipated electricity prices in history. The nation’s foremost electricity reliability experts agree that forcing essential coal capacity off the grid – without reliable alternatives and the infrastructure to support them – will only deepen reliability and economic challenges.

“Look to our friends in Europe, who blindly rushed to close coal plants at a rapid pace and are now working from Germany to Denmark to bring those same plants back online. The global energy crisis is real and imposing costly burdens on people around the world and here at home; taking deliberate steps to intensify that crisis is reckless and unthinkable,” Nolan said.

After years of pushing its power grid toward renewables and away from fossil fuels and nuclear power, Germany’s cabinet recently voted to prolong the operation of large-scale coal power plants to 2024 and to increase its overall supply of coal-fired electricity.

And reports came just last week that as many as 40 coal-fired power plants in the U.S. — representing nearly 17 gigawatts of electricity — have had their lifespans extended in response to concerns about grid reliability. Some plants have had their lives extended by as much as five years, Bloomberg reported.

Democratic Senate nominee John Fetterman, who was campaigning with Biden in the final days leading up to the midterm elections, did not respond to a request for comment on whether he shares Biden’s goals for the coal industry. However, during his failed 2016 Senate campaign, Fetterman signed the “Leave It In the Ground” pledge, promising to support a moratorium on any federal leases for energy development, including coal.

Saturday afternoon, the White House responded to the backlash with a clarification.

“The president’s remarks yesterday have been twisted to suggest a meaning that was not intended; he regrets it if anyone hearing these remarks took offense,” said Biden spokesperson Karine Jean-Pierre said in a statement. “The president is determined to make sure that this transition helps all Americans in all parts of the country.”