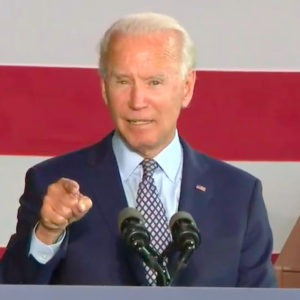 Biden is calling for a $400 billion, four-year increase in government purchasing of U.S.-based goods and services plus $300 billion in new research and development in U.S. technology concerns. The entire package is called “Build Back America.”

“We must reward work as much as we rewarded wealth and now we just reward excessive wealth,” Biden said. “It’s time corporate America paid their fair share of taxes,” adding he was going to raise the tax rate on corporations from 21 to 28 percent: “To provide hundreds of billions of dollars to invest in the growth of this country.

“So today I’m releasing a blueprint… how to create millions of good paying union jobs, building products and technologies that we need now and we’ll need in the future,” he said. “And it starts with a pretty basic idea: When the federal government spends taxpayers’ money they should use it to buy American products and support American jobs — my plan would tighten the rules to make this a reality.”

Biden’s “Buy American” proposal echoes Trump’s “America First” plan for the nation’s economy, except it would “raise taxes on American businesses to among the highest in the world,” according to economist Stephen Moore, co-founder of the Committee to Unleash Prosperity — and a member of President Trump’s task force to reopen the economy.

“Almost everything in [Biden’s] plan would make it much less likely that people will buy American,” Moore told InsideSources. “It doesn’t matter what he calls it, if you raise the U.S. corporate tax rate what you are going to do is put American companies at a competitive disadvantage and you’re going to see more goods and services produced abroad.

“That’s just simple arithmetic that you’re basically putting a higher tax on things that are made in America, how is that going to encourage people to make things in America? It’s nonsensical,” Moore said.

“I believe if this plan were implemented all of the economic gains from the Trump era would be erased and we would be thrust into a second Great Depression that would hurt the poor and minorities most.”

“Vice President Biden truly believes that this is no time to just build back to the ways things were before with the economy’s same old structural weakness and inequalities still in place,” a senior Biden campaign official said in a press call with reporters Wednesday. “This, he believes, is the moment to imagine and build a new American economy for our families and next generations.”

In coming weeks, Biden will lay out additional initiatives that would both provide what his campaign calls a needed boost to the economy while also addressing other challenges — specifically climate change and the pandemic.

Biden will offer new details next week on what the campaign calls a “clean energy and infrastructure plan,” followed by a plan creating a 21st century caregiving and education workforce.

“Joe Biden has been plagiarizing his work going back to 1987, so it’s no surprise to see that Biden is trying to steal President Trump’s ‘Buy American’ message as well as the United Nations’ ‘Build Back Better’ slogan,” Reed told InsideSources.

“Pennsylvanians aren’t fooled and they will not forget Biden’s five decades of supporting job-killing trade deals that have shipped millions of American jobs to China and Mexico. Meanwhile, President Trump continues to lead the Great American Comeback.”