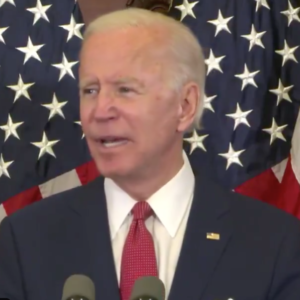 Joe Biden chose riot-weary Philadelphia as the place to deliver a speech casting the 2020 presidential campaign as a contest of leadership and empathy in a time of crisis.

This a day after President Trump marched out of the White House and across Lafayette Square in Washington to project strength, amid days of destructive rioting and looting across the country.

“When peaceful protestors are dispersed by the order of the President from the doorstep of the people’s house, the White House — using tear gas and flash grenades — in order to stage a photo op at a noble church, we can be forgiven for believing that the president is more interested in power than in principle,” he said from Philadelphia’s city hall.

The Trump campaign was not impressed.

“When Joe Biden and his team finally emerged, their initial reaction was to bail out the criminals that burned, looted and destroyed Minneapolis. While livelihoods were decimated, the Biden team was focused on raising money to bail out the criminals arrested,” Reed said. “President Donald Trump was focused on restoring peace and pursuing justice for George Floyd and the victims of the violence. A stark contrast in values.”

George Floyd’s death in Minneapolis at the hands of a police officer sparked a national wave of protests which have been plagued by looting and destruction. Philadelphia in particular saw heavy destruction in its downtown Saturday night, and the violence and damage continued into Sunday and Monday as well.

Besides attacking President Trump, Biden unveiled a set of police reforms including a proposal that would outlaw chokeholds and other measures.

Later in the day, a group of black lawmakers and leaders from across Pennsylvania unveiled their own set of reforms, including a call to ban stop-and-frisk searches in Philadelphia, and calling for the creation of a deputy inspector general position.

“The group called on Council to pass an ordinance requiring citizen input on contract negotiations with the police union, which are usually held behind closed doors and have produced strong protections for officers accused of wrongdoing,” the Philadelphia Inquirer reported.

Joe Biden’s speech today reminded us how a President should lead during a time of national crisis and trauma.

“Joe Biden’s speech today reminded us how a President should lead during a time of national crisis and trauma,” he wrote.