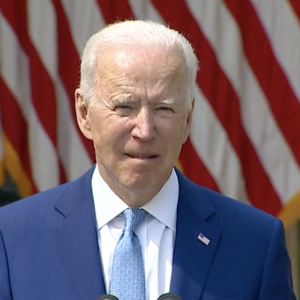 President Joe Biden has announced a half dozen new measures to combat what he calls an “epidemic and an international embarrassment” of gun violence in America. This comes in the wake of mass shootings in Atlanta and Boulder, Colo., as well as a spike in the overall murder rate in major U.S. cities. Philadelphia, for example, is looking at a potentially record-setting year for homicides.

Biden’s actions include directing the Department of Justice to apply statutory restrictions on the type of arm brace the Boulder shooter used to turn his Ruger SR-556 pistol into the equivalent of a short-barreled rifle and fatally shoot 10 people at a supermarket. He also directed the DOJ to write rules that curtail the dissemination of “ghost guns,” homemade firearms that are often assembled from parts purchased online and which frequently lack traceable serial numbers.

These actions are reminiscent of the 1994 Federal Assault Weapons Ban, which Biden helped spearhead when he was a senator. Gun rights advocates and opponents disagree over the impact of the ban. Backers acknowledge it had no measurable impact on gun crime overall, but point to studies claiming it reduced the number of mass-shooting homicides. Second Amendment supporters respond with studies finding the evidence “inconclusive.”

Nevertheless, Biden is pressing ahead. Other key actions include red flag rules, which allow family members to petition for a court order to temporarily bar people in crisis from accessing firearms if they present a risk of hurting themselves or others; a $5 billion investment in community violence intervention programs; and a data-driven annual report on firearms trafficking conducted by the Bureau of Alcohol, Tobacco, and Firearms—the first such report by the ATF in over 20 years.

The House passed two gun control bills last month, but they appear poised to languish in the Senate, considering at least 10 Republicans in that chamber would need to support the legislation.

Kim Stolfer, president of Firearm Owners Against Crime, an organization in Pennsylvania, said the new measures serve only as a distraction to appease the president’s political base.

“We know mandatory sentences work when it targets career violent criminals,” the former Marine said. “Instead, they’re advocating for red flag laws that throw due process out the window. It’s no help to the person in question who might have a mental instability that can be cured.”

“Two-thirds of all gun deaths in the United States are by suicide,” said Milkman. “We’re not trying to hurt law-abiding gun owners, we’re trying to help those who are in crisis. The U.S. loses 22 veterans a day to suicide. We lose more first responders to suicide than we do in the line of duty. Eighty percent of individuals who attempt or complete suicide will show some sign of them thinking about doing that. This legislation is designed to help those individuals.”

He added that while Congress must approve national red flag legislation, the discussion will open a path for states that want to adopt doing so. Milkman also cited recent polling numbers showing the majority of citizens support stricter gun control laws.

“How many more people must die before our leaders act?” he asked. “Joe Biden took the first step. Now Congress needs to do their part and step up and protect our citizens from this uniquely American problem.”

Over the last three years, arrests have steadily risen for people carrying guns illegally in Philadelphia, but their conviction rates have fallen by nearly one quarter. According to Police Commissioner Danielle Outlaw, Philadelphia’s criminal justice system has functioned like a “revolving door” for repeat gun offenders. While she didn’t single out District Attorney Larry Krasner by name, she did highlight the fact conviction rates began dropping after Krasner became DA in 2018.

“Our rights are not sacrificed on the altar of a permissive government that’s not doing its job,” says Stolfer. “We avoid reality with DAs like Krasner who continue to allow criminals on the street. It’s abysmal right now.”