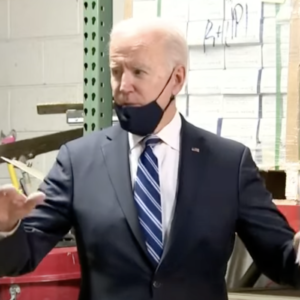 President Joe Biden kicked off his “Help is Here” tour touting his $1.9 trillion spending plan at a stop in Delaware County with high hopes.

And, somewhat surprisingly, a lowered mask.

The incumbent president has made a fetish of wearing a face covering, both during the COVID-plagued campaign of 2020 and after winning the White House. Many political pros saw it as a smart campaign tactic, sending a message to voters that Biden took the coronavirus threat more seriously than President Donald Trump did.

In fact, Biden began his presidency with a plan to issue a workplace mask mandate by March 15 — a day before his Delco visit. (The order has not yet been issued.)

Some observers noted Biden began his press appearance at a minority-owned small business with his mask pulled below his chin. After a few minutes and what appeared to be an off-camera prompt, Biden began pulling the mask up as he spoke, until it covered his face.

Biden was visiting Smith Flooring Inc. in Chester, a Black-owned business that supplies and installs flooring. During peak times, the business has more than 20 employees, but currently they’re down to a staff of 12. Smith flooring is using a federal Paycheck Protection Program loan to help them stay afloat.

Biden noted the impact of COVID on the Keystone State, saying “300,000 Pennsylvanians have lost their jobs– 300,000. Here in Delaware County alone, in 2020 it was 19,000.” Which is why, Biden asserted, the COVID relief package — which Democrats labeled the American Rescue Plan — is needed.

Biden also went out of his way to compliment the two members of Pennsylvania’s congressional delegation who accompanied him: Rep. Mary Gay Scanlon, D-5th District, who represents Delaware County, and Rep. Chrissy Houlahan, a Democrat who represents the adjoining 6th Congressional District in Chester County.

“I’m not being solicitous when I say these are two of the finest congressmen in the United States Congress as far as getting things done,” Biden said. “They have been loud and strong voices for getting this done.”

The owners of Smith Flooring, Kristen and James Smith, thanked the president for visiting their business. “Thank you for helping small business, small minority business. It means a lot that you came here. Not many people stop here in Chester,” Kristen said. “We’re grateful for everything you’re doing.”

From a purely financial perspective, Pennsylvanians have a lot to be grateful for. Pennsylvania state government will get about $7.3 billion from COVID-19 spending package, equal to about one-fifth of its operating costs this year. That’s a significant boon to a state that only saw a 3.1 percent drop in state revenues last year. And it doesn’t include the billions Pennsylvania received last year from previous COVID packages.

The Keystone State’s combined total take is nearly $14 billion according to data from the House Oversight and Reform Committee.

Delaware County GOP Chairman Tom McGarrigle acknowledged “it’s a big deal when a president visits your home county, especially a city with as many needs as Chester.”

However, McGarrigle told DVJournal, people should focus on the long-term impacts of the biggest spending bill in American history.

“The fact you are sending $1,400 to people who haven’t lost their job is a concern. Someone is going to have to pay the bill. I have three children and three grandchildren, they are going to have to pay for this.  This is a $1.9 trillion bill, with such a little amount being used for COVID, it’s a concern,” McGarrigle said.

The Republican National Committee issued a statement as well.

“Joe Biden’s so-called ‘relief’ bill is full of pork and unrelated projects that have nothing to do with combatting COVID in the Keystone State. While Pennsylvanians need actual COVID relief to return to normal life, Biden can only resort to gaslighting them into believing that his bill is anything more than a progressive wish list,” said spokesperson Michael Joyce.

Those complaints may come across as sour grapes given polls showing 70 percent of Americans favoring the legislation. That includes 41 percent of Republicans and Republican-leaning independents, according to Pew Research.

However, even the Associated Press acknowledges the “American Rescue Package” is less a COVID relief bill and more a “transformational change to the nation by halving child poverty, fueling record levels of hiring and pumping money to parents, schools and state and local governments.”

As Biden wrapped up his appearance in Chester, members of the press began attempting to ask him questions. Biden’s staff quickly shut them down. However, they may still get their chance. Earlier in the day, White House spokeswoman Jen Psaki announced President Biden will hold a formal news conference on the afternoon of March 25.

In a less-than-auspicious moment, television coverage cut away from Biden’s visit several times to show a brush fire that had erupted at the Philadelphia International Airport, sending a large plume of smoke into the air. In the foreground was Air Force One, waiting to take the president back to Delaware.