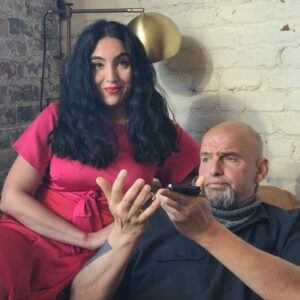 What might have been shrugged off as just another gaffe by President Joe Biden at a Pittsburgh rally on Thursday instead sparked a simmering social media rumor.

Standing with U.S. Senate Democratic candidate John Fetterman and his wife Gisele, Biden said: “John, thank you very much for running. I really do appreciate it. And Gisele, you’re going to be a great, great lady in the Senate.”

“WOW! So now we know the plan!” one tweet excitedly said. “Fetterman will take the oath of office~~shake hands with all the appropriate folks~~~then turn around and say ‘I resign in favor of my wife serving in my place’!! This has been the plan all along!”

Another tweeter, seeming to calmly assert insider knowledge he knew before the Biden speech, said. “Heard rumors of this for a while. Fetterman will resign if he wins and [Gov. Tom] Wolf will put his wife in instead.”

As one commenter comically said, “Leave it to the Pres. to have potentially ‘spilled the beans’ on the game plan…get the guy elected, have him quickly resign due to health issues, then get his wife appointed to be the rubber stamp. Fetterman still gets the cash/slush from special interests; Dems keep the seat.”

“Spilled the beans” may be a bit strong. Fetterman’s stroke in May has gotten significant scrutiny from the media and his Republican opponent, Dr. Mehmet Oz, as the two battle in a close contest to fill the seat of retiring GOP Sen. Pat Toomey. And rumors that the Fettermans are running a bait-and-switch campaign — vote for John, get Sen. Gisele — are rampant in Pennsylvania political circles. And it has some historical grounding, according to past news reports.

When Fetterman was mayor of Braddock, The Incline reported in November 2018 that he proposed a similar move. “Months before John Fetterman was elected Pennsylvania’s next lieutenant governor, he approached Braddock council and offered to resign the mayorship immediately — if they would appoint his wife to the seat on an interim basis.”

The Incline said the Braddock Borough Council declined and that Fetterman was upset. The council instead opened the process of selecting an interim mayor to the public, seeking applications from interested residents.

After the Braddock Borough story came out, the Pennsylvania Republican Party said in a press release, “The revelation of Fetterman’s use of strong-arm politics to create a dynastic mayoral office is in stark contrast to the public profile he tries to put on as a folksy populist working to bring change to Harrisburg. However, it is not surprising.”

That was well before Fetterman’s health was a public issue.

The speculation soared after Fetterman’s poor performance in an NBC News interview. Leaping into the spotlight, Gisele Fetterman told The Independent that NBC News, its reporter, and its networks should apologize. “I would love to see an apology towards the disability community from her and from her network for the damage they have caused,” the candidate’s wife said.

A day before Biden’s visit the Fetterman campaign released a one-page letter from Fetterman’s doctor, Dr. Clifford Chen, claiming the 53-year-old is “recovering well from his stroke and has continued to improve.” Chen is a repeat donor to Fetterman’s political campaigns.

The resignation-replacement scenario seems unlikely to play out, and if it occurred, it would not go over well with the public said David Barrett, professor of political science at Villanova University.

“I don’t think public opinion would be favorably inclined toward that,” Barrett told the Delaware Valley Journal. “If he quickly resigned and his wife were appointed to fill out his term by the new governor, I do not think that would be well regarded among voters. But post-election, politicians do a lot of things.”

Barrett noted the stroke allowed for various speculation in the Senate race between Fetterman and Oz. However, he said Fetterman’s health hasn’t been a major factor in why the race has tightened.

“His health has been in the news, but Oz has gotten much more mileage from crime and inflation. The stroke is an issue, but it’s not as big a deal as other issues,” Barrett said. “Some of this has been the Fetterman campaign’s fault. They were not very transparent after the stroke during the primary. That lack of transparency obviously created concern about what else they aren’t transparent about.”

Historically, there are few races where health concerns have been a deciding factor, said Berwood Yost, director of the Floyd Institute’s Center for Opinion Research at Franklin & Marshall College. He also said a much bigger campaign problem for Fetterman is the crime issue.

“I don’t see that happening. I think he is running for office to serve,” Yost told the Delaware Valley Journal. “His doctor said he is recovering. And he is–by standards of the Senate–young. So, I wouldn’t put stock in rumors like that.”

Much will be riding on the Oct. 25 debate, Yost said. If Fetterman looks confused, it would be devastating. But low expectations could also play in his favor, Yost said.

“In the primary, he was not a skilled debater. He won’t have to give an objectively good performance,” Yost said of Fetterman. “He will only have to outperform low expectations.”