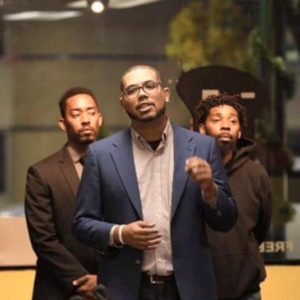 A Biden campaign adviser has apologized for misogynistic tweets from his past, but the Joe Biden presidential campaign — as well as the state Democratic Party — are continuing to keep silent on the matter.

Guzman was also hired by the Biden team as deputy coalitions director for Latino engagement here in Pennsylvania. He served in a similar role for the state party for the 2018 re-election campaigns of Gov. Tom Wolf and Sen. Bob Casey.

Although Guzman did not respond to requests for comment from Delaware Valley Journal for the original report, he did issue an apology on Wednesday to the PA Post.

“Those tweets do not represent the values that I have today, nor do they represent the values that I will fight for as the first Latino from Reading to be elected to the PA House of Representatives,” Guzman said. “The truth is, there is no excuse for my words. I was young, ignorant, immature and — like a lot of young people — did not consider the impact my words would have.”

“I want to apologize to my mother, grandmother, my sister, and all the women who have supported me in my life,” Guzman said in his statement Wednesday. “I’ve dedicated my life to serving my community, especially my hometown of Reading because I wanted to work to create opportunity for those who for too long have been left out of our politics.”

Delaware Valley Journal has asked both the Biden campaign and the Pennsylvania Democratic Party if they accepted Guzman’s apology. They declined to respond.

Guzman is running against Vincent Gagliardo Jr., in November. The pair are hoping to fill the seat vacated by Democrat Tom Caltagirone, who served in that role for 40 years, demonstrating just how “blue” the district is.

Gagliardo had once been on the Reading City Council as a Democrat but is now a Trump-supporting Republican.

“It’s wrong,” Gagliardo told Delaware Valley Journal in response to seeing Guzman’s tweets. “I was raised in a house where you didn’t even swear in front of a woman. You don’t touch another woman; you don’t do anything to them. You don’t talk bad about them. What he did is inexcusable, and he does not belong in any type of public office or public position.”

Gagliardo said he sees a difference between Guzman’s tweets and President Trump’s behavior towards women.

“Does the president do wrong stuff? Yes,” he said. “Does he do it to the extreme that Guzman did? I don’t think I’ve seen him say something like that to someone. If he did, I don’t know it.”

When DVJ pressed Guzman on the now-infamous Access Hollywood tape in which Trump said he sometimes would grab women “by the p***y,” Guzman again said he was unaware.

“I don’t even remember hearing about that, but that’s wrong,” he said. “That is wrong.”

Caltagirone then went on to defeat Gagliardo easily in the general election, by an 80-20 spread.

Prior to 2018, Caltagirone had continued to be re-elected for numerous cycles with no opposition in either the primary or the general, according to Ballotpedia. In January, he announced he would not seek re-election.

In December of 2017, the Philadelphia Inquirer and the Pittsburgh Post-Gazette reported that Pennsylvania House Democrats had paid nearly a quarter of a million dollars to quietly settle a sexual assault allegation against Caltagirone.

DVJ broke the news about Guzman’s misogynistic tweets about an hour before the Biden team announced California Sen. Kamala Harris as his vice-presidential running mate, a choice heralded by many for selecting a woman, but also a person of color. Biden made a pledge to pick a female in a March debate.

“Secondly, if I’m elected president, my cabinet, my administration will look like the country and I commit that I will, in fact, appoint a — I’d pick a woman to be vice president.” Biden said.