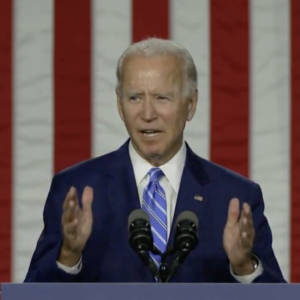 When former Vice President Joe Biden unveiled his massive energy and climate plan Tuesday afternoon, he peppered his speech with references to Scranton, Pennsylvania, steel mills and the energy-sector workers so vital in the Keystone State.

And when Republicans responded, they chose a Pennsylvania congressman to to do it. It’s all an indicator of the key role working-class voters in this state, many of them working in the energy sector, will play in the 2020 election.

The former vice president revealed his “clean energy future,” calling for a carbon-free power sector by 2035 with promises of $2 trillion in federal spending towards renewable technologies. He also called for the country’s “second great railroad revolution,” and pledged to convert government fleet vehicles to electric while creating 500,000 charging stations nationwide.

Biden did not, however, clarify his position on fracking. In a March debate with Sen. Bernie Sanders, Biden promised to end any new fracking. More recently, however, Biden said “fracking is not going to be on the chopping block.” Biden didn’t mention the issue in his speech.

Republicans believe that energy policy is a winner for their party. They counterprogrammed the announcement with the help of Pennsylvania’s 16th Congressional District Rep. Mike Kelly.

The Trump campaign hosted a conference call hours before Biden’s speech with Kelly and Republican House Minority Whip Steve Scalise of Louisiana. They both attacked the former vice President as one the architects of the failed $500 million taxpayer-backed loan to solar panel maker Solyndra.

Although energy-rich Louisiana isn’t considered winnable for the Democrats in 2020 on the presidential level, including a Pennsylvania representative on the call further shows Republicans see energy issues — particularly the jobs they create — as Trump’s best bet in the Keystone State.

“When people tell me they’re in favor of [an] ‘all of the above’ [energy strategy], I say I’m in favor of everything that’s below,” Kelly said while calling the U.S. the “Saudi Arabia” of natural gas.

“This is a guy [Biden] who has a history of doing nothing, but now is crowing about ‘Well, you know in Pennsylvania we’re still going to allow you to do fracking.’ Really? All he does is put a moist finger in the air to see which way the wind’s blowing and that’s his policy,” Kelly added.

When asked why Biden is outpolling Trump in Pennsylvania, Scalise said the contrast between the candidates on smaller policy issues has yet to crystalize in the minds of many voters, something he expects to happen once the party’s nominating conventions are finished and Election Day is closer. Scalise said a Biden administration would be “Solyndra on steroids.”

Kelly remarked he would like to see the President campaign more in Pennsylvania but isn’t concerned that recent campaign stops have been in Republican-safe Oklahoma as well as a planned event in New Hampshire that was ultimately cancelled.

The conference call also illustrated how eager Republicans are to link the more moderate Biden to the far-left New York Rep. Alexandria Ocasio-Cortez, who joined a Biden climate policy task force in May. Ocasio-Cortez, however, has resisted White House efforts to label her a Biden “advisor.

A 2017 report by the American Petroleum Institute estimated that Pennsylvania is home to 322,600 fracking jobs. Republicans and the Trump campaign are hoping many of the blue-collar and union workers in the energy business can be peeled away from Democrats in order to swing the commonwealth’s critical 20 Electoral College votes to Trump.

Proof of how potent that strategy might be stems from the recent shuttering of the Atlantic Coast Pipeline project in Virginia, West Virginia, and North Carolina.

The energy industry expressed its concerns over Biden’s policy approach.

“We stand at a crossroads for the nation’s energy future, and the choices policymakers make in 2020 and beyond will determine whether we build on America’s energy progress or shift to foreign energy sources with lower environmental standards,” American Petroleum Institute president and CEO Mike Sommers said in a statement. “You can’t address the risks of climate change without America’s natural gas and oil industry, which continues to lead the world in emissions reductions while delivering affordable, reliable and cleaner energy to all Americans.”

“We will continue to work with members of both parties to advance real solutions to climate change that build on American energy leadership and protect the good-paying union jobs our industry supports in states like Ohio and Pennsylvania and across the country,” Sommers said.

The Laborers’ International Union of North America pointed their anger squarely at Democrats after the project was cancelled by its owners.

“Thousands of hardworking LIUNA members, who spent years acquiring the skills to build the Atlantic Coast Pipeline safely and to the highest standards, now do not know where their next paycheck will come from,” the Laborers’ International Union of North America said in a recent statement. “The left’s war on energy infrastructure projects, they acknowledged, is “killing construction jobs by the tens of thousands for working families.”

The union angle was not lost on Biden and his speechwriters, as he promised that converting to green technologies would boost union fortunes. He also singled out a steel mill he recently visited in Scranton as an example of the auxiliary industries that would benefit from windmill construction to meet his plan.