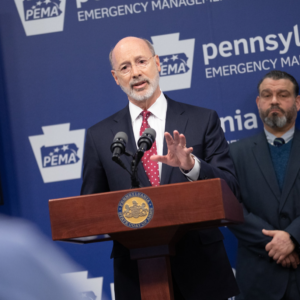 Posted to Politics May 14, 2020 by Nathan Benefield

Wolf launched these salvos against his fellow Pennsylvanians — local elected officials, job creators and workers in eight counties — seeking to provide for themselves and their families. He called them “cowards” and “deserters” for assessing local risks and daring to think for themselves.

We expect name calling and temper tantrums on a schoolyard playground. But from the governor’s office, we expect leadership. Leaders don’t keep people in the dark. Since the COVID-19 crisis began, however, Wolf has thumbed his nose at calls for transparency while taking actions that are decimating Pennsylvanians’ livelihoods.

The truth is Wolf has only himself to blame for the legitimacy crisis he now faces.

Last week, state House lawmakers — including 90 Democrats — voted unanimously to force Wolf to follow transparency guidelines, especially regarding his notorious business waiver process. This legislation upholds the state’s Right-to-Know law, which the governor effectively suspended. In response, Wolf lashed out at lawmakers and condemned the bill, saying, “I’m trying to be transparent!”

After withholding a list of business waiver recipients for weeks, he suddenly rescinded certain waivers just prior to releasing the list, hiding many recipients from public scrutiny. Auditor General Eugene DePasquale has launched an audit of the waiver process. A state Senate committee subpoenaed the Wolf administration for related information, then took him to court when he refused to honor the subpoena.

The only thing transparent about Wolf is his attempt to cover up who received waivers and how he granted them.

With trust undermined, local officials are bucking Wolf’s color-coded reopening plan to do what they believe is best for their constituents. Franklin, Lebanon, Lancaster and Schuylkill counties announced they would begin the reopening process without Wolf’s approval.

Sheriffs and district attorneys in Cumberland, Greene, Beaver, York and Perry counties declared they will not enforce Wolf’s shutdown orders. And Huntingdon County commissioners say businesses will not be cited for reopening. Lawsuits from business and community leaders seek damages in federal court over Wolf’s handling of the crisis.

Given historic unemployment levels of more than 25 percent and warnings that 60 percent of small business could face permanent closure, these demands for a responsible reopening should come as no surprise.

In response, Wolf threatened to strip businesses of their licenses and cut emergency funding for Pennsylvanians facing unemployment and financial ruin. He justified dropping the hammer on his own citizens by saying it will save lives, but there’s even reason to question whether he’s achieving that fundamental goal.

Wolf’s wholesale ban on elective surgeries, for example, is predicted to cost lives.

The UPMC hospital system flouted the ban after they came nowhere close to reaching their capacity. Deaths of despair from drugs, alcohol and suicide are predicted to spike by up to 150,000 because of the recession and unemployment caused by prolonged business shutdowns.

From the beginning of this crisis, we heard that seniors were most at risk, yet the Wolf administration never implemented a plan to protect nursing homes, which have seen more than 2,000 deaths. Only after a Senate committee hearing did Wolf reverse course and focus on nursing homes.

State Health Department data shows hospitals haven’t been overwhelmed and the number of serious cases is subsiding. County leaders recognize their residents need to earn a living while mitigating COVID-19, just as hospitals recognized they couldn’t abandon their patients’ other needs because of the pandemic.

When mistakes are made, a true leader owns up to them and explains how the problem will be fixed. A true leader also accepts critique and changes course when necessary.

But when faced with a challenge from his fellow Pennsylvanians who believe they can protect lives while preserving livelihoods, Wolf chose finger-wagging threats over reasonable solutions.

Being governor can be a tough job — especially in a crisis. But this is what Wolf signed up for.

If Wolf wants to be a true leader, he should apologize to those he insulted, come together with lawmakers and local leaders to address their concerns, and develop a plan that treats everyone with the dignity they deserve.