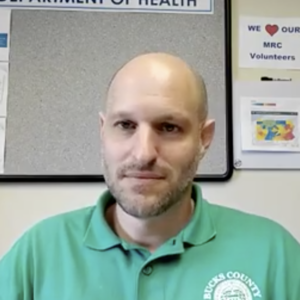 COVID-19 may be under control in Bucks County, but officials urged residents to follow the newly reinstated restrictions from Gov. Tom Wolf to avoid a new outbreak.

Wolf is bringing back limits on restaurants, bars and other businesses due to what he described as “an unsettling climb” in new coronavirus cases across Pennsylvania, according to a statement. The measures include no longer allowing bars to serve only alcohol, rolling back capacity limits to 25 percent for restaurants and advising indoor gatherings to have no more than 25 people.

While the restrictions affect the entire state, Dr. David Damsker, director of the Bucks County Health Department, in a Thursday press conference, made clear “the Governor wasn’t penalizing Bucks County.” Bucks County new case counts have remained relatively low even as parts of the state, particularly the southwest, experience spikes.

Damsker believes the governor’s actions are appropriate. “If they see outbreaks in a certain type of situation or facility where they can make different rules, or strengthen rules on a certain issue, that’s the way it should be done.”

While access to testing has improved since March, Damsker said the wait to get a test has been too long. He described one story of a person who waited so long for their result “they did their entire isolation waiting for their test result to come back.” Damsker blamed these delays on labs, particularly national ones, that have struggled to increase their capacity.

However, Damsker expressed hope that with the problem identified, he does “think it will get better” and capacity will rise soon.

Bucks County’s experience with contact tracing is also complicated. While 90 plus percent of people are very cooperative,” some residents who participated in gatherings over weekend holidays like Memorial Day and the Fourth of July have been reluctant to admit it.

And while the county’s case count is low, it’s still up from last month. Damsker blamed the rise, not on restaurants and bars, but on people “having parties at their houses” where “they’re not socially distancing.”

“You don’t have to be out in public. You can get coronavirus at your friend’s house,” Damsker said.

Another concern has been out of state travel which has led to community spread in Bucks County Commissioner Gene DiGirolamo reminded residents “there are an awful lot of states out there that are not in as good of a shape that Pennsylvania is.” He advised those traveling to ones the state has identified to follow the guidelines and quarantine for 14 days upon return.

While health is the major concern, commissioners also expressed sympathy for businesses struggling to stay alive amid increased restrictions. Damsker said that “95 percent of our facilities have been doing what we asked them to do,” but he understands why some local businesses may be frustrated.

Asked if the county planned to provide more relief to businesses now facing new restrictions, Bucks County Commissioner Bob Harvie said they are considering “a second round of funding to small businesses,” but nothing is going to be immediate.

Harvie added that bringing business back depends on defeating the virus.

“We want every business to be up and running full speed, but the fact of the matter is the virus is in control right now.”