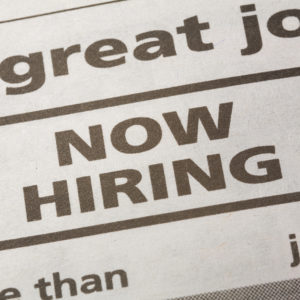 As the area moves toward normalcy in the wake of the COVID-19 pandemic, unemployment is declining. Now, area business owners, like their counterparts across the country, are wrestling with the challenge of finding enough employees to meet increased demand.

Chester County has fared better than the area’s other four counties. According to the Bureau of Labor Statistics, the county’s unemployment rate as of the end of March was 4.7 percent. Guy Ciarrocchi, president and CEO of the Chester County Chamber of Business and Industry, said county officials were devising ways to deal with a labor shortage even before the pandemic hit last spring.

“Our number one public policy issue was a workforce shortage and a need for workforce development,” he said. “We began thinking about everything, how we would try to recruit people to move here even faster than they’re already moving here, but also the process of talking to the community college and the high schools about providing certification for different things.”

The story is similar in Montgomery County where unemployment fell from a peak of 13.7 percent last April to 5.6 percent last month. The search for workers has become critical, particularly in the restaurant industry.

Jackie Evangelista and her husband Tony own Hatboro Dish in the heart of Hatboro’s business district. Due to staffing shortages, the couple has been working seven-day weeks that often extend well after closing time. Jackie wants to expand their staff from the current 12-15 employees up to 20, but the restaurant remains shorthanded.

“It’s awful,” she says. “I’m putting it out every week (on Facebook) what we need and I’m not finding anybody,” she said. “I actually put an ad in Indeed.com too, but I’m finding nothing.”

And while President Joe Biden says generous unemployment benefits do not contribute to the worker shortage. “We see no evidence of that,” he said Monday. Ciarrocchi doesn’t agree.

“If you pay people 80, 90, 100 or 110 percent of their pre-COVID wages not to work, there is for some people an incentive not to work,” he said. “I think now that we’re looking at this latest round of (unemployment benefits) running through September, I think that’s going to create a problem.”

“Right now for small businesses, they’re all challenged to find workers,” said Garrity.  “I travel the state and you can see that in every county and it’s largely because some people make more money to not come to work.”

However, Ciarrocchi does agree with Secretary of Commerce Gina Raimondo that other concerns are sidelining workers as well, including fear of contracting COVID. “The number one reason now that people aren’t going back to work is what you said: fear,” Raimondo said.

Ciarrocchi said it has been a concern for local businesses for months. “As early as last spring, many chamber leaders began sharing with state and local officials that the constant drumbeat and the constant focus on the pandemic, which was certainly justified, was creating a mindset of apprehension for people to work,” he said.

And business owners have their own fears, over potential liability exposure should one of their workers become ill from COVID-19.

“I think there is apprehension among employers not knowing to what extent the expenses they should undertake,” he said, “because there are no clear standards of safety; there’s no liability protection.”

Evangelista echoes Ciarrocchi’s thoughts regarding individuals losing their incentive to return to the workforce in light of increased unemployment benefits.