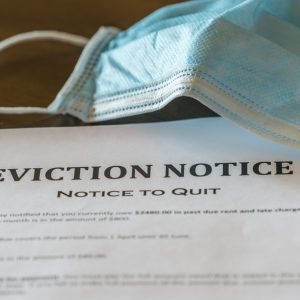 As statewide and federal economic recovery programs barrel towards their expiration dates, county governments in the Delaware Valley are unveiling their plans to give relief to residents, especially where housing is concerned.

Chester County on Thursday held a webinar to explain their rent relief programs, RRPs that began earlier this week.

The program allows for the Pennsylvania Housing Finance Agency, the PHFA, to use money designated by the federal CARES Act for RRPs to give up to $750 to renters who qualify until November 30th of this year. All counties are offering the program to their residents.

To qualify, you must have become unemployed after March 1st of this year, have seen a 30 percent fall in your income since that date, and have an income that is lower than the median for your family size in your county.

The RRPs for counties began on July 6th, meant to coincide with the end of the ban on evictions in Pennsylvania on July 10th. However, Governor Wolf on Thursday extended the ban until August 31st. Wolf said he did this to guarantee to residents that “they will have a roof over their heads” while the fight against coronavirus continues, according to a statement.

However, residents should not take this announcement as a reason to delay applying for relief.

Robin Senss, Director of Supportive Services and Special Programs at the Housing Authority of Chester County, HACC, explained that funding from the PHFA for counties is fluid. If other counties may need more help, funds from Chester may deplete as PHFA transfers money to more struggling counties. Therefore, she explained, it is better to apply “sooner than later.”

In the early days of the new program, Dale Gravett, Executive Director of the HACC, said that the biggest problem has been the fact that “folks haven’t really looked at anything, and they’re calling us up and things become confusing for them.”

Senss explained that there has also been a problem “proving [applicants] had a 30 percent reduction in income.” Now, the HACC is asking for bank statements from January to calculate applicants’ percent change in income from March to confirm they qualify.

Landlords have complained that the $750 renters receive is not enough. This is because landlords who have renters on the program must agree to forgive the difference between the $750 and the normal rent. But for many, this $750 is only a small fraction of the normal rent, leaving landlords with less money coming in.

Some renters are frustrated with the program as well, particularly married ones. Gravett explained that married couples are “only entitled to the $750, whereas two lessees,” living in the same household, “could each get the $750.” Gravett expects to encounter this complaint again.

Another problem has been with unemployed lower-income workers. Due to the CARES Act giving an extra $600 to unemployment checks, many lower-income workers are now making more money than they did before. Therefore, they don’t qualify for the RRP because their income increased.

However, the extra money in unemployment checks expires on July 31st, and the HACC is “anticipating in the beginning of August a big increase of applications,” said Gravett. He also said HACC would be adding staff to handle the expected increase.

Governor Wolf’s extension of the ban on evictions does not apply to those on the new relief programs, but that is no worry as landlords who participate must agree to not evict renters who receive relief until 60 days after the last month of assistance.

Overall, it is clear the program is still new and some things the HACC will have to “learn as we go,” said Senss. Renters who qualify can take comfort in the fact they now have the ability to protect their homes until nearly the end of the year.

Links to other rent relief programs in Pennsylvania