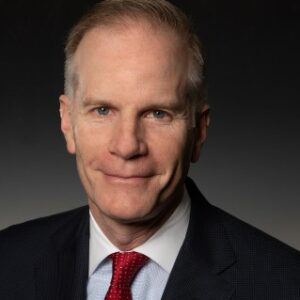 As 2022 Looms, Bill McSwain Is Still Swinging Away

Former U.S. Attorney Bill McSwain, a Marine Corps veteran with degrees from Yale and Harvard Law, has never been one to hold his fire. And with violent crime surging in Philadelphia — and a governor’s election in 2022 — he’s not about to start now.

McSwain, a Republican and former U.S. Attorney for the Eastern District of Pennsylvania, has taken to tweeting at state Attorney General Josh Shapiro, calling him “MIA” on issues from undated ballots to staying mum on anti-Semitic protesters in Bala Cynwyd, to failing to endorse a candidate in the contentious Democrat primary for Philadelphia district attorney.

And when a report hit last week critical of Pennsylvania’s economy, McSwain tweeted, “Tom Wolf’s legacy: PA ranks 40th out of 50 states in economic performance. The next Republican Governor in 2022 will fix that.”

But his favorite foil has been Philly D.A. Larry Krasner, the poster boy for progressive politics and criminal justice reform. McSwain told Delaware Valley Journal Krasner’s policies have contributed to the recent surge in the city’s violent crime.

“What has happened in Philadelphia is that the crime situation has gotten much worse under his tenure. The thing that’s really tragic is, it’s probably going to get much worse over the next four years. And as bad as it is now, it can get worse,” McSwain told Delaware Valley Journal during a recent podcast interview. Krasner handily won his party’s nomination in May over the opposition of local police unions and is expected to win re-election in November.

“[Krasner] likes to use the excuse of the pandemic to explain the skyrocketing crime rates, the skyrocketing shooting rates, the homicide rates, and the serious violent crime rates,” McSwain said. “That’s nothing but a cop-out and an excuse because all of those statistics were moving in the wrong direction as soon as Mr. Krasner took over.”

McSwain believes Krasner’s high-profile embrace of progressive policies like declining to prosecute some lesser crimes and not bringing gun violence cases to court is sending a message.

McSwain says that during his term as was serving as U.S. Attorney, from April 2018 to January 2021, he tried to mitigate Krasner’s far-left policies. In his first year, McSwain’s office indicted 669 cases, a 40 percent increase from the previous year and the most charged by the U.S. Attorney’s Office in a decade. And 894 defendants were charged in 2019, a 49 percent increase.

“Philadelphia was in a crisis,” said McSwain. “And that crisis wasn’t going to go away as long as Mr. Krasner was the D.A.”

While grand juries were temporarily suspended during the COVID lockdown, McSwain’s office continued to press forward on civil and criminal cases, according to a statement issued upon McSwain’s departure. He also began programs to fight healthcare fraud and prioritized violent crime, along with political corruption during his tenure, the statement said.

“Bill did a terrific job in recognizing the need for more aggressive prosecution in Philadelphia in the wake of the after-effects of the ‘wokeness’ brought on by progressive D.A. Larry Krasner,” said Castor.  “Bill knew what had to be done and did so aggressively to the limit of his authority as United States Attorney. I admire him for that.”

McSwain said, “If you’re a prosecutor, you’re not a policymaker. You’re supposed to enforce the law. That’s a crucial component in deterring crime. So there are innumerable studies that have shown that, for example, the way that you reduce violent crime is by having more police in an area, not less and serious prosecution, not lax prosecution.”

McSwain cited a high-profile example that resulted in the murder of Philadelphia Police Sgt. Jimmy O’Connor, who was serving a warrant with a S.W.A.T. team and was gunned down by a suspect. In December, Elliott and three other men were indicted on federal murder charges in O’Connor’s death.

“He was allegedly murdered by an individual named Hassan Elliott, and Hassan Elliott never should have been on the street,” said McSwain. Elliott, now facing the death penalty, had probation violations at the time but those charges were dropped.

“There were all sorts of reasons why this guy absolutely should have been in jail but he wasn’t because Krasner didn’t want him in jail,” McSwain said. “And, as a result, a heroic Philadelphia police officer was murdered. And there are lots and lots of examples like that…Essentially, the media just ignores it because it doesn’t fit their narrative. The media largely have been covering for Krasner because they’re invested in his narrative.”

McSwain isn’t known for being subtle, and that’s been the case when it comes to his future political plans. “Pennsylvania is starved for leadership right now, and has been for a while,” he tweeted just weeks after leaving office. “Clearly we need to take the state in a new direction. My newly-launched organization, Freedom PA, will help us do that.”

When pressed about whether he intends to run for governor, McSwain told DVJournal, “I believe deeply in public service. It’s been a big part of my life. When I joined the Marine Corps and served in the military, when I served as Assistant U.S. Attorney in the Eastern District of Pennsylvania and when I served as U.S. Attorney, so I’m very interested in public service and doing what I can to make Pennsylvania a better state.”

McSwain grew up in West Chester and still lives in the community today with his wife and childhood sweetheart Stephanie and their four children, ages 14 to 23.

Joining the Marines after he graduated from Yale was one of the best decisions he’s ever made, McSwain says. “I learned a lot. I got a chance to serve the country that I love. I made great friends for life…It was just something in my heart I felt I should do.”

In 2000, he graduated from Harvard Law School, where he was an editor of the Harvard Law Review.

When not working as a partner at Duane Morris,  McSwain spends a lot of time reading, particularly biographies. likes spend time with his family and to exercise, including running and biking. He’s also an avid reader, particularly of biographies. One favorite subject: George Washington.

“He was an extraordinary person that we, as Americans, owe a great deal to,” he said. “Washington set the example. Twice in his life, he could have been king and twice he walked away from it.”