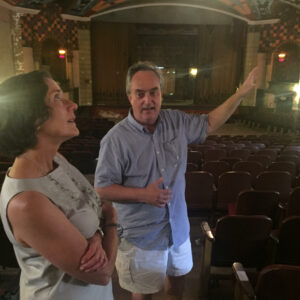 Democrat Dr. Val Arkoosh, the Montgomery County commission chair who is running for the U.S. Senate, visited a local landmark Monday as part of a campaign swing through the Delaware Valley. 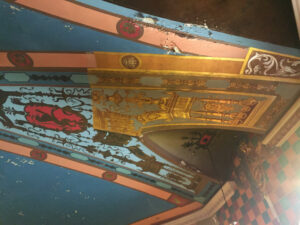 The ceiling at the Lansdowne Theater

The historic Lansdown Theater, built in 1927, awaits restoration under the auspices of the Historic Lansdowne Theater Corporation. Board President Robert Jara and Matthew Schultz showed Arkoosh around the interior of the Hollywood Moorish structure. It was designed by Philadelphia theater architect William H. Lee and still retains some of its former glory, including an ornate ceiling replete with gold leaf and a beaded curtain hanging across the stage.

The nonprofit corporation, which was launched 14 years ago, wants to restore the structure to a 1927-era theater but with modern amenities, said Schultz.  It started as a silent movie theater and then showed talkies. Preservationists envision the theater becoming a venue for live acts.

And as a nonprofit, the corporation is seeking various grants to continue its mission. So far, $13 million of an estimated $16 million is on hand. Schultz hopes to obtain federal funds from Sen. Bob Casey and Rep. Mary Gay Scanlon, along with loans, to fund the gap. Construction is expected to be completed by the end of 2022.

“The challenges for a project like this, we don’t fit into anybody’s category.  If it were housing, we could do it easily,” said Schultz. “When we started the project, I was going down to see (the late Sen.) Arlen Specter. That was how long ago it was.” 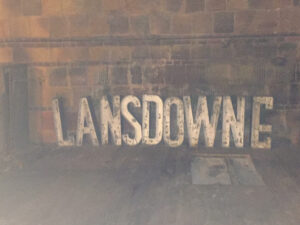 “We were getting money from Republicans and Democrats because they saw the potential,” said Schultz. The group is now applying for money from the American Rescue Plan “as their best shot,” he said.

“There may be a potential,” said Arkoosh.

Jara said it took the group a while to decide what to do with the theater. Then it got a commitment from a promoter to do live shows, which helped secure the necessary loans.

“I didn’t want to come in and divide this up and lose the grandeur of the space,” said Schultz, who noted he has experience with the redevelopment of the Avenue of the Arts in Philadelphia. But Lansdowne is his hometown. “This changes the town dramatically. It rebrands it. In terms of revitalization, it’s not graphic arts. It’s music.”

“It goes back to access to capital,” he said. “Is there a way to provide funding that’s flexible because this is the biggest thing in Lansdowne ever. But if we didn’t stay with it, the opportunity would be lost.”  Many other old theater buildings are now drug stores or other retail spaces, he said.

An economic study of the project showed the theater itself would create 50 jobs. Businesses that would likely locate nearby would yield another 80 jobs, Schultz said. Also, a developer is buying properties in the area.

“This is an engine for economic development,” he added.

The marquee was already redone, there is a temporary new roof and offices on the second floor have been renovated and in use.

Arkoosh compared the Lansdowne Theater to the successfully renovated Keswick Theatre in Glenside, which has become a mecca for all sorts of concerts from classical music to country to rock n’ roll.  Restaurants and other small businesses have located nearby to serve the theater patrons.

After her visit, Arkoosh said that she was interested in the project’s potential to bring jobs to the area and “create opportunities for businesses.”

“Every small community I visit is looking for ways to support local businesses and grow them in the community,” Arkoosh said.

Arkoosh, one of several candidates vying to replace retiring Republican Sen. Pat Toomey, has been campaigning throughout the area. In recent days she’s attended the Bucks-Mont PRIDE Festival and visited Tannery Run Brew Works in Ambler as well as LCH Health & Community Services in Kennett Square and Harmony Hill Nursery in Downingtown.

Back in Montgomery County, Arkoosh toured M&S Centerless Grinding and Meron Medical; then she stopped at Snipes Farm and Education Center in Bucks County. She also visited MANNA, a Philadelphia nonprofit that provides food for critically ill people.