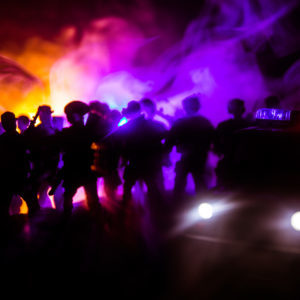 Are ‘White Nationalists’ Really Behind the Riots in America’s Black Communities?

Americans watched in horror as protests over Gregory Floyd’s death devolved into riots and looting from New York to Los Angeles this weekend, but perhaps just as surprising were media reports of the dark conspiracy behind it:

How did such an unlikely theory spread so fast?

On Saturday morning, Minneapolis Mayor Jacob Frey, a progressive Democrat, claimed his city was “confronting white supremacists, members of organized crime, out of state instigators, and possibly even foreign actors to destroy and destabilize our city and our region.”

Minnesota Gov. Tim Walz (D) claimed about 80 percent of those arrested for looting and vandalism were outside agitators, while his Lt. Governor Peggy Flanagan claimed: “There are white supremacists there. There are anarchists. There are people who are burning down institutions that are core to our identity.”

This message was immediately amplified by members of the media.

MSNBC’s Joy Reid posted multiple tweets about the “white nationalists involved in the protests” and reporting as fact that the rioting was “already documented as coming from white nationalist groups.” During an interview with Reid, Minnesota Attorney General Keith Ellison shared the tale of a shadowy figure with an umbrella who, he said, might be evidence of white supremacist plotting.

Headlines appeared in mainstream media outlets featuring “reports of white nationalists” involved in the violence spreading across the country.

And when Attorney General William Barr made a statement blaming the violence on the notorious Antifa organization — with a long history of rioting and conflict — the Washington Post‘s Jonathan Capehart complained:

“The Attorney General failed to acknowledge the white nationalists involved in the protests, as warned by every Minnesota official who has spoken today.”

Less than 24 hours later, those “Minnesota officials” had walked back their claims about large numbers of outsiders spreading chaos in their cities after records revealed the vast majority of those charged were in fact Minnesota residents. NBC News reported that “little evidence of these claims [of outside agitators] has been put forward.”

“NBC News reached out to police departments in several major cities that were the scene of protests, but thus far none have said whether outside groups had been found to be operating during the protests,” they reported.

The suggestion that the violence Americans saw on their TV screens was being perpetrated by a network of white nationalists is suspect on its face. It’s also an unnecessary stretch in logic. Far too often in the recent past, peaceful protests have been overwhelmed by people with violent agendas, and without any nefarious plotting.

According to University of Miami political scientist and conspiracy theory expert Joseph Uscinski, we shouldn’t be surprised. Looking for conspiracies is part of America’s political character.

“For example, we have a lot of conspiracy theories involving George Soros funding the protests through Black Lives Matter, and theories about Russia funding them through white nationalists,” Uscinski told InsideSources. “It’s something everybody does to one extent or another.”

And, he says, it’s largely driven by pre-existing political beliefs.

“What Joy Ann Reid was saying was probably in line with both her and her network’s ideology and world view, as well as their audience’s,” Uscinski added.

And according to Uscinski’s research, while cultural stereotypes put dubious conspiracy theories on the political right, they are in fact a bipartisan phenomenon based on who is in power.

And so when President Obama and Democrats controlled Washington, the “birther” conspiracy questioning Obama’s birth certificate was en vogue. But during the George W. Bush administration, the most active conspiracies were on the left: 9/11 truthers, and a GWB plot to cancel the 2008 election and round up his enemies in FEMA (Federal Emergency Management Administration) camps.

People who are winning the political fight are less likely to see conspiracies afoot undermining the will of the American people and foiling the legitimate outcomes of our elections.

Or as Uscinski puts it, “Conspiracy theories are for losers.”

Don’t tell former Obama adviser Susan Rice. “I’m not reading the intelligence today, or these days — but based on my experience, this is right out of the Russian playbook,” Rice said on CNN Sunday. “But we cannot allow the extremists, the foreign actors, to distract from the real problems we have in this country.”

Riots at Black Lives Matter protests are a Russian operation? That’s one theory.