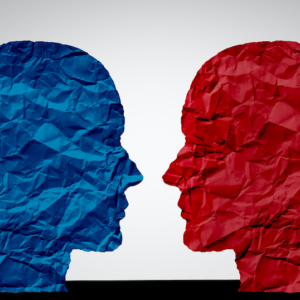 Americans Are Divided; New Research Indicates How We Can Come Together

Nearly 160 years ago, Americans went to war over our divisions. Today, there are many who fear we are on that same path after Election Day.

No matter who wins, half of voters will be disappointed, angry, and fearful. People will cast blame on each other, social media, and our political system — hardly a good foundation for when we have to work together, see each other in church, and carve turkeys together.

The better path forward is one that creates empathy and understanding. It demands that each of us rises above the bitter partisan fray. It forces us to be responsible for our own decisions and how we interact with our fellow Americans to achieve Barack Obama’s “hope” and reach Ronald Reagan’s “shining city on a hill.”

One answer may lie in focusing our attention on political problem-solving instead of where we disagree. I’m using the Decision Point Method to ask people — from students to everyday workers to members of Congress — what they would do in the “hot seat” of a political dilemma.

By thinking through these political — but non-partisan — scenarios, people gain insights into how elected officials and political opponents see the world instead of just focusing on partisan disagreements.

My research expands what’s already emerging in academic literature — that focusing on how people think instead of what they think, we may increase feelings of understanding toward political opponents without compromising core values.

By partnering with Decision Point and the college activist group BridgeUSA, the research takes existing work one step further — how does watching a political opponent engage in problem-solving and deliberative thinking impact how we perceive other people’s intelligence and moral character?

Our pilot data shows glimmers of promise for how to positively move past November 3. In a sample of online participants, conservatives and liberals alike who watched former Members of Congress analyze how to solve particular challenges respected cross-party elected officials more than when they saw campaign ads or news profiles.

We are also using the Decision Point scenarios in an ongoing study with BridgeUSA’s college student network. We assign pairs of politically disagreeing students to discuss hot button issues.

Some watch news clips of politicians; others watch clips of the same politicians walking through the Decision Point scenarios. As with the internet sample, watching politicians’ reasons appeared to have the same effects — political opponents are leaving our studies with greater respect for each other.

BridgeUSA CEO Manu Meel recently wrote at RealClearPolitics that there is “a chasm” among young people “between those fully engaged in politics and those who feel apathetic and disengaged.”

Our alliance’s goal is to find ways to build bridges across the political divide for everyone, from the passionately engaged activist to the average voter to the cynically disengaged non-voter.

Thanks to the internet, these bridges can be built more easily than ever because anyone with an internet connection can see the inner workings of political deliberation across the aisle and use that understanding to see the humanity in others.

Our democracy was founded upon respect for the dignity of Americans and their differences—and we must be able to discuss those differences with civility. What we choose to read in the news and what we choose to watch online shape our understanding of the “other side.”

We can — we must — choose to bridge divides peacefully and empathetically so the American experiment can continue.

Kurt Gray is an associate professor of psychology and neuroscience at UNC Chapel Hill, where he directs the Center for the Science of Moral Understanding, an interdisciplinary initiative that seeks to uncover how best to bridge divides in America today. He wrote this for InsideSources.com.