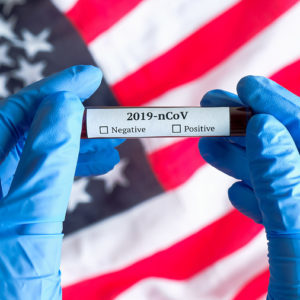 America, Pennsylvania and the Coronavirus

With COVID-19, as Pennsylvania goes, so goes the nation.

The geography of the novel coronavirus in the Keystone State closely mirrors that of the U.S. The number of fatalities in Philadelphia is, sadly, nearing 200. Yet remarkably, 32 of the Keystone State’s 67 counties have not experienced a single COVID-19 death.

A Pennsylvania Department of Health map indicates how strongly density is correlated with the virus’s penetration level: The populous counties surrounding the Philadelphia and Pittsburgh metro regions are depicted in red, orange and yellow, while the rural, central portion of the commonwealth is suffused with counties colored blue and green. 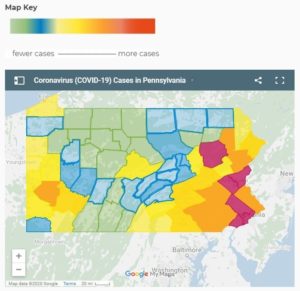 Beyond Pennsylvania, the story is much the same.

According to The COVID Tracking Project — an online tool created by the venture-capital firm Related Sciences and journalists with The Atlantic — as of April 13, at 9:12 PM EST, only one resident of Wyoming had died from the novel coronavirus.

And as the virus continues to impose a brutal butcher’s bill in the tri-state area, New Orleans, and Detroit, the disparity between America’s hardest-hit communities and what many cultural elites consider “Flyover Country” deepens — a phenomenon that is likely to have major implications for the national and Pennsylvania economies.

To put the contrast in simplest terms, the Empire State’s mortality ratio is one death per 1,935 residents. (New York City’s comparable figure is 1:1,143.) In Utah, the ratio is 1:178,109. With rock-bottom smoking and obesity rates, and the youngest median age in the country, the Beehive State’s good fortune is far from shocking.

But Arkansas, hardly a mecca for fitness enthusiasts, enjoys a ratio of 1:100,594. West Virginia, another state that regularly lands near the bottom of state health rankings, fares twice as better: one death per 199,127 residents. (Given its proximity to the country’s worst hot zone, Pennsylvania’s ratio is a respectable 1:24,431.)

Move from the state to the metro level, and the heartland’s salutary status persists.

And the Des Moines Register reports that trade strife had already cratered “corn, soybean, pork and other commodity prices,” and now, “Iowa’s rural economy faces widespread challenges as it battles through the coronavirus crisis.”

With the economies of many of Pennsylvania’s rural counties — e.g., Adams, Blair, Bradford, Columbia, Northumberland, and Schuylkill — highly dependent on food manufacturing, the Keystone State is far from immune to what The New York Times called the disruption of “global supply chains,” which has induced “shortages and price increases that are cascading from factories to ports to retail stores to consumers.”

Stay-at-home orders and mandated closure of “nonessential” businesses in the places where so much of the nation’s food and fuel originate are not sustainable. For those advocating a speedy return to work, the heartland’s COVID-19 fatality data make a compelling argument.

D. Dowd Muska is a New Mexico-based researcher and writer.