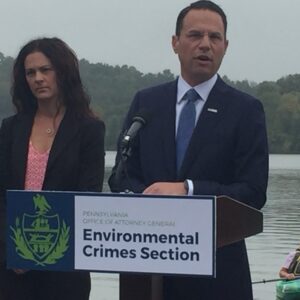 In one of the worst kept secrets in Pennsylvania politics, Attorney General Josh Shapiro is running for governor in 2022 and he plans to make it official in a speech in Pittsburgh on Wednesday, according to published reports.

Shapiro, 48, a Democrat, is a former state representative and the former chairman of the Montgomery County Board of Commissioners. He was first elected as the state’s top law enforcement officer in 2016 and re-elected in 2020.

Shapiro’s announcement will come on the heels of a well-publicized press conference last week where he outlined 48 criminal charges he’s filing against Energy Transfer, the company that is building the Mariner East 2 pipeline. During his tenure as attorney general, Shapiro also made headlines for his investigation into the Catholic clergy and child sexual abuse. That investigation was a centerpiece of his 2020 re-election campaign.

Shapiro is the son of a public school teacher and a pediatrician and grew up in Abington, according to his official website. He is married to his high school sweetheart, Lori. The couple has four children. A graduate of the University of Rochester, Shapiro earned his law degree from Georgetown University.

“He is one of the brightest guys I know,” said Foster. “And he’s a terribly good politician. He’s also a good administrator and he surrounds himself with good people, who are very good at what they do and I think, in all honesty, that’s the mark of a good leader.”

If elected, Shapiro would succeed Gov. Tom Wolf, also a Democrat, who is limited to two terms.

Meanwhile, a plethora of candidates will be vying for the Republican nomination in the 2022 primary.

“We can’t wait to see what Josh Shapiro runs on. Will it be crushing the economy and stealing a year of school from kids, or undermining police and causing a spike in violent crime?” said Tim Murtaugh, a senior advisor to former U.S. Representative Lou Barletta, who is the Republican frontrunner according to a recent poll.

Another GOP candidate, Guy Ciarrocchi of the Chester County Chamber of Business and Industry said, “Josh Shapiro has misused the office of attorney general to promote himself while abandoning our cities to crime and fear; suing employers who create jobs; ignoring our students and enabling Tom Wolf to shut down our lives and livelihoods. No parent, no employer, and no one who works for a living believes he has the ability or interest in fixing the very mess that he helped create.”

Among the other Republican contenders are Bill McSwain, the former U.S. Attorney for southeastern Pa., Charlie Gerow, a GOP strategist, and Montgomery County Commissioner Joe Gale.