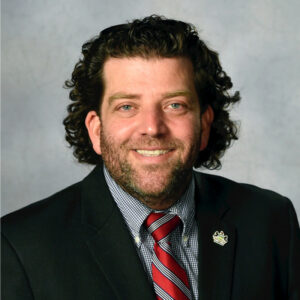 Vincent Rongione, whose status as the chief administrative officer of Upper Darby remains in legal limbo, filed a lawsuit earlier this month against the members of the township council who voted in June to fire him. He is seeking damages of no less than $50,000.

The 19-page complaint (99 pages when including exhibits) was filed in the Delaware County Court of Common Pleas on Friday. The filing seeks a jury trial and alleges that the six council members violated the commonwealth’s sunshine laws and conspired against Rongione, the top appointee in Mayor Barbarann Keffer’s (D) administration. Rongione’s lawsuit also names the entire governmental body of the town council as a defendant, in addition to singling out the group of six by name.

“As a direct and proximate result of Defendants [sic] actions, Mr. Rongione suffered and continues to suffer emotional distress, mental anguish, embarrassment, harassment and the denial of his position as Chief Administrative Officer,” the complaint concludes. The filing also asserts that Rongione has “performed brilliantly” as the township’s CAO.

The bipartisan group of six on the township council voted for Rongione to forfeit his office at a council meeting on June 1, the culmination of a months-long battle over the township’s finances, in particular, questions over the roughly $20 million the township received from the federal American Rescue Plan Act, or ARPA.

Rongione and his attorney argue that the vote to fire him violated Pennsylvania’s sunshine laws, “because the stated purpose on the agenda did not provide the Township Council, the Township administration and members of the public with a clear understanding of what purpose and the known action item to be voted on.”

Despite the 6-5 vote by the council to relieve Rongione of his duties, he has continued to work while the members of the council are seeking a court order that would bar Rongione from continuing his duties or from entering township offices because of the forfeiture.

The other five Democrats on the town council have rallied behind Mayor Barbarann Keffer and Rongione after the conflict erupted in public at a council meeting in early February.

At that February meeting, Township Treasurer David David Haman (D) raised questions about the ARPA funds, saying that the end-of-month balances of some bank accounts had dropped below what would be expected. (By the nature of the township’s governance structure, the treasurer’s role is one more of oversight, and does not have direct access to the bank accounts).

Soon after, the group of six authorized an outside investigation into the ARPA funds and all the township’s finances. Keffer authorized her own third-party audit.

In mid-May, two weeks before the council voted to oust Rongione, Keffer released the results of the audit she commissioned, conducted by national accounting firm Marcum LLP.

The group of six have cast doubt on this conclusion, saying that the investigation was incomplete because Marcum did not have access to all township accounts.

At the June 1 meeting, Councilwoman Wagner led the charge for Rongione’s dismissal, something Rongione highlighted in his complaint, but in doing so apparently incorrectly named Councilwoman Wentz.

Wagner laid out a theory that Rongione had moved monies in a “forfeiture” fund — an account the township shares in conjunction with the district attorney’s office that holds monies temporarily forfeited by persons who have been arrested and are still awaiting adjudication of their guilt or innocence.

“Wentz’s attack on Mr. Rongione was ghastly, ill-tempered and more importantly, according to the Township Solicitor Kilkenny’s office, stunningly wrong on the law.”

Democrat Councilmember Andrew Hayman agrees with Rongione that the vote to fire him violated the commonwealth’s sunshine laws, but also says the follow-up actions by the group of six have likely been illegal as well.

The decision by the group of six to seek a court order to remove Rongione “wasn’t even voted on in a public meeting,” Hayman said.

“Council is required to vote on litigation in a public meeting and that wasn’t done. It’s not on the agenda for tonight’s council meeting [Wednesday, July 6]. So it’s not something council could add on tonight either. I don’t know whose responsibility that is, whether that’s our council president, President Burke’s responsibility. But it is not on the agenda and was not on the agenda. And as such, I do not believe it is or was a legitimate, permissible action.”

Requests for comment emailed to all other members of the township council, Mayor Keffer, and Rongione were not returned.

Throughout most of the controversy, the group of six have maintained the investigation they sponsored will produce evidence that Rongione inappropriately moved township money without the necessary authorization from the council. The results of that investigation are expected this summer.

As for the legal action underway by the group of six, a conference is slated for Thursday before Delaware County Court of Common Pleas Judge Spiros Angelos to initiate a determination whether council had the authority to deem Rongione’s office forfeited without the mayor’s approval.