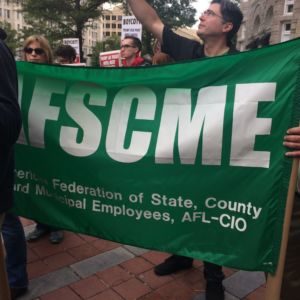 AFSCME Settles With Montco State Employee In Dispute Over Back Dues

A woman who works at a state hospital in Montgomery County has won back union dues in a settlement with her former union. It represents yet another setback for government unions in the post-Janus era.

Delaware Valley Journal first reported the story of Elizabeth McKeon, a clerk typist at the Norristown State Hospital, in June when she filed a federal suit against the American Federation of State, County and Municipal Employees (AFSCME) with the assistance of the Fairness Center, a Pennsylvania nonprofit group.

“While it took more than a year and a federal lawsuit for AFSCME to acknowledge her resignation, Ms. McKeon has finally won recognition that she is no longer a union member, plus a refund with interest of the money AFSCME took after she resigned — meaning AFSCME chose to settle by giving Ms. McKeon all the relief she had sought in her lawsuit,” attorney Danielle Susanj told Delaware Valley Journal.

The original lawsuit filing did not specify the amount McKeon was seeking to recoup, and the Fairness Center did not disclose the settlement payment.

In McKeon’s complaint, she alleged that AFSCME ignored both her resignation and her repeated requests to acknowledge her exit from the union and stop dues collections that were automatically deducted from her paychecks.

The Fairness Center describes itself as a “law firm that provides free legal services to those hurt by public-sector union officials.” It also announced Wednesday it had achieved the same results for Ralph Rhodes, a youth development aide.

“Public employees should not have to jump through excessive hoops and take extreme measures to disentangle themselves from a union they no longer support,” said Nathan McGrath, president and general counsel of the Fairness Center. “Both Ms. McKeon and Mr. Rhodes resigned their memberships but had to file federal lawsuits in order to recoup their money that AFSCME continued to have taken from their paychecks even after they resigned from the union.”

AFSCME Council 13 in Harrisburg did not return requests for comment.

“AFSCME is the largest of the unions representing state government workers, and its contract typically sets the major terms for most of the other collective bargaining units,” a 2019 report from PennLive.com noted. “AFSCME in itself represents 33,500 persons, or more than 40 percent of the state’s current workforce.”

The McKeon and Rhodes cases are representative of the fallout from a 2018 landmark U.S. Supreme Court decision, Janus v. AFSCME 31, that ruled nonunion members cannot be compelled to pay dues to public sector unions.

Legal experts have continually highlighted that the Janus ruling is not as wide as some believe because it only applies to unions for government employees, not unions for private companies, such as automakers.

Nevertheless, many pundits and legal watchers predicted the ruling would cause government unions to hemorrhage members and lose political clout as a result.

“We deprived unions of hundreds of millions of dollars from people who didn’t want to participate,” William Messenger, a Janus attorney, crowed after the 2018 Supreme Court ruling.

AFSCME, however, hit back at that perception in 2019 when it announced it had gained members.

“In our first filing with the Department of Labor since the Janus case, we reported a gain of 27,735 dues-paying members and retirees,” the union tweeted in March 2019.

Mark Janus, the namesake of the Supreme Court case, has yet to receive a refund of his dues.