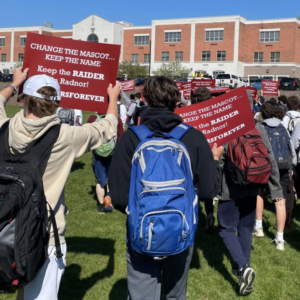 ADDIS: Radnor Raiders: Zeroing In on the Cancellation of Tradition

On September 3rd, 2020, the Radnor Township School District School Board voted 8-1 to retire the Radnor Raiders nickname. This was immediately following a separate 9-0 vote to remove the Native American imagery. In June 2021, the Board voted unanimously to approve a new nickname for the district: Raptors. However, it is what occurred within the 10-month hiatus between nicknames that has left a community divided, and an 87-year-old tradition in ruins.

While supporters of the change argue the Raider nickname is inextricably tied to the retired Native American imagery, many residents advocated for a rebranded Raider in hopes of maintaining the 87-year-old name that was originally not associated with any cultural group or imagery at inception in 1934.

This group of Radnor community members make up the 650-plus member Facebook page “Change the Mascot, Keep the Name: Keep the Raider in Radnor!” originally started by a current Radnor High School student. As a member and alumni-leader of this group, our motive can be defined by one word: compromise. Remove the imagery. Keep the name.

Nevertheless, the Radnor School Board failed to listen to a large number of its constituents, and passed up on a terrific opportunity to teach students what compromise truly means: “a settlement of differences by mutual concessions; an agreement reached by adjustment of conflicting or opposing claims, principles, etc.” Amidst today’s social and political climate, our society struggles to make concessions and settle despite our differences.

In Radnor, the failure to compromise has broken trust and destroyed relationships between community members, neighbors, and the board officials elected to represent us. I hope the following overview brings to light the ways in which leadership and process have been eradicated in one of PA’s top public school districts, and that this piece motivates everyone to take to the polls this November and vote for reasonable, accountable, and transparent school board candidates.

To begin, it is important to note the original timing and process behind the initial conversation. The Raider nickname was eliminated during the duration of one virtual school board meeting last summer, as families across the country struggled physically and financially during the height of the COVID-19 global pandemic. In less than one hour, the board discussed and voted to remove a key piece of Radnor’s identity and history. No community dialogue. No thorough research. No full accounting cost of rebranding. Just a rushed vote over Zoom by the nine board members. As districts across the country found ways to get kids into school safely, the Radnor School Board prioritized eliminating a storied nickname absent any student, alumni, and community involvement. Zero process.

The Radnor School board subsequently ignored thousands of students, alumni, and community members’ requests to rebrand the Raider nickname without Native American imagery. More specifically, a student-generated petition racked up over 2,600 signatures, 350+ students walked out of Radnor High School in protest of the decision, and hundreds of emails, letters, and public comments were sent in by Radnor Raiders across the country. All of which were disregarded by the board. Zero reason.

In early 2021, the RTSD administration and school board put together and approved the Radnor Mascot Selection and Rebranding Committee, which would work to narrow nickname options prior to current students voting on the final two. This committee was composed of 41 individuals, including myself. Despite multiple meetings discussing the Raiders name, and a community survey yielding 992/1315 responses for the Raiders name (75 percent), the co-chairmen of the committee dismissed the Raiders name for consideration without committee approval or conversation. To make things worse, multiple nicknames (including Radnor’s new nickname, Raptors) were eliminated by a majority of the committee then brought back into play by the administrative co-chairs in a unilateral decision. As a matter of fact, the Raptors name was eliminated twice, and brought back twice. The community has yet to receive answers for why this happened. Zero transparency.

As frustrations grew due to the corruption on the Rebranding Committee, three members of the School Board called a special board meeting in May 2021 to ask for the Raiders nickname to be allowed to go through the rebranding committee’s process. This did not mean it would return as the school’s nickname but rather would allow for a fair and democratic process to play out. After a five-hour meeting full of public comment and board conversation, the motion failed in a 6-3 vote. In this same meeting, certain members of the board acknowledged the lack of process and due diligence in making the original vote in September 2020 to retire the Raiders nickname. However, despite acknowledging these obvious flaws that have frustrated much of the community, the board continued on with a failing Rebranding Committee, hopeful that a new nickname would be selected before the end of the school year.

The student voting took place on June 14th and 15th of 2021, with a 67 percent turnout by eligible student voters in grades 8-12. However, it must be noted that this vote took place the week following the senior’s final day of high school, and just two days before their graduation. In return, only about 50 percent of the Class of 2021 voted. As long as a new nickname was chosen, the school board did not care how it was selected. Zero accountability.

June 29th, 2021, brought the RTSD School Board meeting to approve of the new nickname, Raptors, which gathered 55 percent of the student body vote and defeated the “R” for Radnor (no nickname) option. Emotions were high at the meeting, as residents voiced their concerns over the new nickname (the Latin root of the word Raptor), the process as a whole and the etiquette of board members over the course of the year. Per usual, the board did not listen and approved the new Raptor nickname unanimously. Zero consideration.

One board member’s comments in particular on June 29th have stuck with me in the weeks following the meeting. He expressed: “we were voted in to vote our conscience.”

Personal opinion and political agendas took control, and the duty that these officials were elected to abide by and fulfill was unquestionably breached. Voting on personal beliefs and opinions – regardless of the issue – is exactly what is wrong with the current school board, and is what has divided our Radnor community during an already trying time.

Politics have no place in our schools or on the board. I urge all readers to pay attention to what is happening in your local district, learn about all candidates, and vote for leaders of process, reason and transparency this coming November. It’s about the person, not the party.

Kyle Addis is a rising senior and student-athlete at Franklin & Marshall College in Lancaster, PA. He is a 2018 graduate of Radnor High School where he served as Senior Class President as well as captain of the Varsity Football and Lacrosse teams.