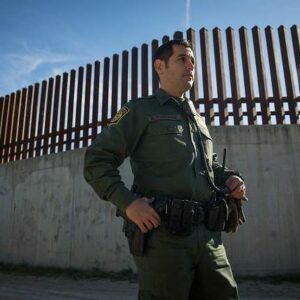 AADLAND: Southern Border Is a Crisis and Disaster Demanding Action

The southern border has become a humanitarian disaster affecting the nation. This situation requires an immediate and effective federal response.

While we can feel compassion for those seeking a better life, we must also recognize that unfettered access to this country is not compassionate as it has created conditions for massive human and illicit drug trafficking, leading to enormous suffering. Furthermore, it threatens our national security.

No other nation in the world allows such unrestricted immigration.

We must take the following steps to rectify this situation while implementing balanced, compassionate immigration reform.

—Finish the wall. A wall provides a measure of control that no amount of electronic surveillance can. We have only 19,000 border agents, and there is no way to control every mile of the border with agents alone. When appropriately resourced with personnel and technology, the wall is an effective deterrent.

—Reinstate the Stay-in-Mexico policy. The policy was better for America and those seeking to immigrate here legally. The United States decides who has access; at the same time, immigrants should be given a clear, understandable and swift process for immigration.

—Deport any undocumented immigrant convicted of a felony. Following punishment, send the offender back to his or her country of origin. The United States should not bear the burden of felons who are here illegally.

—Make fines for employers of undocumented immigrants higher and more enforceable. We should do what we can to disincentivize employers who illegally lure in workers.

—Eliminate social services paid for by taxpayers for undocumented immigrants. Staying in the country must require following the law. American citizens should not bear the burden of those here illegally.

—Assist Mexico, Central America and South America with creating thriving economies and harmonious societies built on the rule of law. Relations with such nations must de-incentivize illegal border crossings and include plans to cripple cartels enriching themselves from human suffering.

Though the vast majority of illegal immigrants are people who are merely seeking a better life, there are thousands of hardened criminals or bad actors who must be prevented from entering.

Lax border policies allow easy entry for individuals from countries worldwide, including terrorist elements. Increasingly belligerent nations such as Russia, China and Iran are exploiting open borders. Have we so soon forgotten the attacks of 9/11?

President Biden’s policies encourage drug cartels to build ungoverned empires along the southern border, championing evildoers who have no respect for human life or our nation’s sovereignty over the well-being of American citizens.

Seemingly beneath our noses, the federal government is conducting middle-of-the- night secret transportation of illegal immigrants from the border to every state without consent from state authorities. It is no longer surprising to see undocumented immigrants sneaking across backyards or ranches after crossing the border.

Furthermore, the U.S. is using taxpayer dollars to spend on health and welfare for undocumented immigrants when such support escapes our own citizens. Fentanyl, heroin and cocaine are streaming across the border unchecked. Fentanyl is now the leading cause of death for those between 18 and 45 years.

Large quantities of drugs have shown up in  Florida,  Texas,  California and  Massachusetts.  As recently as July, Colorado law enforcement seized “about 170,000” fentanyl pills in Aurora. In fact, according to the Colorado State Patrol, just days ago, the state has “already seized more fentanyl in 2022 than all previous years combined.”

A well-controlled southern border will benefit Mexico and other South American countries, discourage the cartels and reduce human suffering.

The administration’s dereliction of duty on the southern border situation is undermining the sovereignty of the United States, threatening our national security, contributing to skyrocketing crime, and creating an increased drain on our economy. This epic failure is hurting American citizens. We must rectify this dangerous situation immediately.

Erik Aadland, a Republican, is a candidate for Congress in Colorado. He wrote this for InsideSources.com.