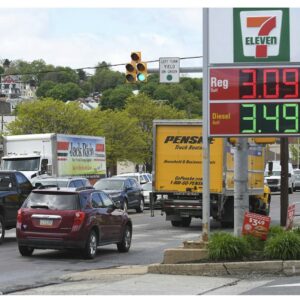 A ‘Perfect Storm’ of Factors Combined to Cause East Coast Gas Hikes, Shortages

Rising gasoline prices, with the specter of shortfalls in the offing, are causing consternation among Delaware Valley residents and business owners.  However, folks in other eastern states, like Georgia,  Virginia, and South Carolina, are already dealing with hundreds of gas stations that have run dry.

The gas-shortage panic was sparked by a hack of the Colonial pipeline, which supplies 100 million gallons of gasoline and other fuels a day to the eastern United States. Although pipeline officials announced the line was up and running again late Wednesday afternoon, backlogs are expected to continue for days.

Devon Gladden, a spokesman for AAA, said it was a “perfect storm” of factors that brought about the gas price spikes. Even before the pipeline issue, AAA was predicting higher prices after Memorial Day, thanks to more people driving, higher crude oil costs, a shortage of tanker drivers, and the switch from winter blends to more expensive summer blends of gasoline. Gladden said we can expect prices to drop again—this fall.

“It definitely affects us,” said Danny Ginsberg, co-owner of Primex Garden Center in Glenside. While it costs his company more to deliver topsoil, mulch, and nursery items, there is a hidden issue as well. Rising gas prices increase the cost of all the items the garden center sells.

“It’s raising prices,” he said. “If you look at everything, prices are rising. A lot of it has to do with gas prices and not enough truckers. That’s what we’re seeing in the hard goods, prices going up. And there’s not enough availability. It’s definitely going to affect a lot of things.”

“The increase in gas prices amounts to a substantial tax increase,” said Austin Hepburn, a Radnor resident who owns a window and door replacement company.

Maryann Brown, a pharmacist who lives in Warminster, said, “I think there will be a gas shortage like back in 1977.” She noticed that gas was up to $3.05 a gallon in Willow Grove recently.

But some people lay the blame on the Biden administration.

“The rising gas prices and looming gas shortages from this ransomware hack are a warning of what the future holds under Joe Biden,” said Cindy Spurdle, a retired Devon resident. “The plan of Biden and his far-left allies to eliminate fossil fuels as quickly as possible will bring on more crises like this one.

“Yesterday, the secretary of energy was asked whether the Biden administration had considered using rail to transport gasoline, fuel oil, etc. She answered that the safest route was via pipeline and rail had not been considered. Well, an alternative pipeline to help during this crisis was shut down the day Biden took office, the [Keystone] XL Pipeline, which means we need to wait this out.

“Unfortunately,” Spurdle continued, “I am afraid that this crisis is just the beginning and a direct result of Biden and the far-left radicals in his administration pushing the Green New Deal at any cost. The American people realize that this green energy deal and the plan to eliminate fossil fuels is fast approaching under Biden, even though the country is far from ready for it. Biden’s actions, though not directly, have created this crisis.”

Meanwhile, Fox News reports a federal agency issued a warning on Wednesday to not fill plastic bags with gasoline.

“While there have been no major gasoline outages reported in Pennsylvania, motorists are definitely seeing increases at the pump,” said Jana L. Tidwell, manager of Public and Government Affairs for AAA Mid-Atlantic. Her organization is reminding drivers there is ample gasoline supply in the U.S. and that it is just a matter of getting deliveries to stations to meet demand, so there is no need to panic buy.

“We advise against panic buying and carrying extra gasoline in your vehicle – it is dangerous and can prove deadly. Consider filling up when you have a quarter of a tank of fuel remaining,” she added.