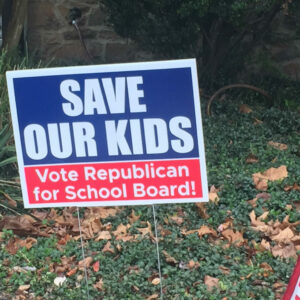 Turnout was light for Tuesday’s general election in the DelVal area, with school board races on the front burner in many areas, as parents who became newly aware of their children’s curriculum thanks to in-home learning during the pandemic came out to vote.

“Regardless of our wins, our children have gained thousands of community members standing up for their education, and to us, that is a huge win. Back to School PA set out to bipartisanly bring advocates and candidates together who believe in-person education is essential and we can proudly say we accomplished just that,” said Schillinger.

In Chester County, the in-person voting appeared to show the Republican candidates winning the various county row offices late Tuesday evening. However, Chester County GOP Chairman Dr. Gordon Eck pointed out some 28,000 mail-in ballots had not been counted, and another 5,000 might come in on Wednesday so that could change the results of those races.

One race that was hotly fought was the Bucks County district attorney position. With 34 percent of the vote in at midnight, incumbent Republican Matthew Weintraub was ahead 58 percent to challenger Antonette Stancu’s 41 percent.

Weintraub posted this message to his campaign Facebook page: “Since the day I first stepped foot in the DA’s office as an intern during my Temple law school days, I knew I had found my true calling. Thank you for the opportunity to serve as your DA during the last 5 years. I look forward to continuing as your District Attorney and on this Election Day, I ask for your vote.”

Later Tuesday evening he said, “Everyone has been so supportive. I’m excited to continue to serve the people of Bucks County as district attorney.”

At midnight, with 57 percent of the vote tallied in Delaware County, the races for sheriff and county council were too close to call.

“We still have 40 percent of precincts, and thousands of mail ballots to be reported as I write to you,” Delaware County Democratic Chairwoman Colleen Guiney said in an email. “I am cautiously optimistic that as votes are counted, we will have a good outcome for the people of Delaware County. I encourage all voters to remain patient as our dedicated Election Board employees continue their process to ensure a free and fair election for our county.”

“Generally, the day was good and it appears that Democrats had about mid-30s percent turnout,” said Foster. “We are hoping that it turns out to be 40 percent or thereabouts but we will have to wait to see. It was low voter turnout but seemed to pick up beginning (in the) afternoon. So we will see.”