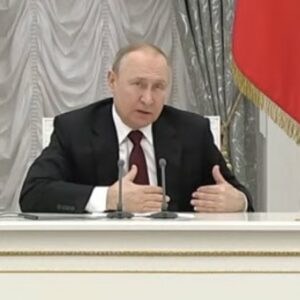 “I consider it necessary to take a long-overdue decision: To immediately recognize the independence and sovereignty of Donetsk People’s Republic and Luhansk People’s Republic.” With that statement on Monday, Russian President Vladimir Putin shifted the balance of power in eastern Europe by re-drawing the map of Ukraine through brute force. As of late Monday night, he had reportedly ordered Russian military forces into these regions of eastern Ukraine.

Putin’s actions drew mixed messages from the Biden White House, with some talk that Russia’s move may not spark a massive backlash the way a traditional invasion would. Meanwhile, some Delaware Valley political figures did respond to Putin’s provocative actions.

“The grave predictions of our intelligence community are coming to fruition,” tweeted Rep. Chrissy Houlahan (D-Pa.). “Putin is violating Ukrainian sovereignty. Together, our nation, NATO Allies, and EU partners will hold him accountable.”

And while Rep. Brian Fitzpatrick (R-Pa.) didn’t release any reactions on Monday. However, a week earlier the House Foreign Affairs Committee Ranking Member of the Subcommittee on Europe, Energy, Environment, and Cyber joined other House GOP leaders to announce the  Never Yielding Europe’s Territory (NYET) Act.

“As we have done before with other rogue powers, it is time for the United States to send a clear message: if Russia insists on threatening the sovereignty of another state and jeopardizing global security, there will be severe economic consequences and sweeping sanctions,” said Rep. Fitzpatrick. “Congress must act now to ensure that the United States continues to stand shoulder to shoulder with Ukraine by providing our Ukrainian partners with the aid and resources they need to uphold their territorial integrity and sovereignty.”

GOP U.S. Senate candidate Dave McCormick is both a successful businessman and a veteran.

“Joe Biden’s weakness and incompetence have set the world ablaze, from Kabul and Kyiv to our southern border,” the Army veteran of the first Gulf War said. “We must return to strong America First policies and leadership that made us more respected abroad and more secure at home. I served in the military because I love our country. I’m running for the U.S. Senate to serve again.”

One of his GOP primary competitors made her point during Monday night’s debate. “Biden has no plans whatsoever,” said Kathy Barnette from Huntingdon Valley. “He’s playing whack-a-mole, whoever pops their head up, he ends up hitting it at the moment. That is not how you lead the greatest nation that’s ever existed in the world, and yet that is where we find ourselves right now. We have two different strategies that need to be employed. We’re talking about Russia potentially entering into Ukraine and being given the green light for them to enter in and do a little bit of damage. And then we have China with Taiwan. China is about to do a Hong Kong on Taiwan.”

“Today, Vladimir Putin gave a speech that exacerbated the Ukraine crisis, indicating Russia’s pending recognition of two separatist eastern Ukrainian regions. This is a naked power grab and revision of European borders – and the United States appears powerless to act.

America has been on the retreat for more than a year. Given that Ukraine has already suffered cyberattacks and significant economic damage at the hands of Russia, the United States should have already implemented severe sanctions against Putin and the Russian regime.

The unfortunate truth is Vladimir Putin was allowed to control events and the narrative from the very beginning. Sanctioning Russia and signaling our resolve to deny Putin a free hand is more important now than ever. With a Russian military buildup only miles from the Ukrainian border, the time for action has already passed. However, it is not too late to take immediate and urgent
steps in an effort to de-escalate this situation.”

And Christian Nascimento, a Republican running for the Fourth District Congressional seat said, “Vladimir Putin recognizing the independence of breakaway countries is political theater and a transparent pretext to justifying the invasion of the Ukraine.

“Putin intends to upend the post-cold war global order and attempt to bring us back to the days of the USSR. Putin only understands strength, so the US must lead a global response, which should include arms and support to Ukraine, as well as economic sanctions on Russia while they continue to destabilize the region and beyond.”